Representatives of the churches, communities, and local authorities will participate along with traditionalists in the 25th commemoration of the Úz Valley battle. Sándor Tamás, president of Kovászna/Covasna County Council, and Csaba Borboly, president of Hargita/Harghita County Council, called on all county citizens to participate in this event on August 26 at the cemetery where the fallen heroes’ remains rest.

“The Úz Valley battle of the twenty-first century is ongoing on visible and hidden fronts. It is visible, because they want to occupy the land with those unholy concrete constructions. But there is a battle on a hidden front as well, started by the parallel state. During the past six months they have caused much harm and profaned the memory of Hungarian soldiers, not distant, unknown heroes,” Sándor Tamás said in a press release announcing the event. “The Úz Valley cemetery occupation wasn’t the action of simple people but the evil plan of spiritual warfare,” he added.

Tamás also invites residents of the Three Szekler Seats to participate in the event to pray together at the 25th commemoration of the Úz Valley battle and give hope to each other, because those living in Szeklerland have a future together. “Let’s show everyone: we are at home,” Tamás writes.

The 25th commemoration starts at 3:00 p.m. local time with a performance by the Youth Orchestra of Csíkszenttamás, followed by a march of traditionalists. At 3:35 p.m. the Men’s Chorus of Csíkborzsova will perform, and the participants will be greeted at 3:50 p.m. The ceremonial worship will start at 4:00 p.m. and be led by bishop József Tamás, and the invited speaker will be Franciscan monk Csaba Böjte. The worship will be followed by speeches from Transylvanian church representatives and close with the laying of wreaths on the graves of Úz Valley’s fallen heroes.

When the Russian army broke into the Úz Valley on August 26, 1944, the brunt of the initial attack was absorbed by the fresh recruits aged 17-18 of the 11th Szekler border guards battalion. A quarter of a century ago on this day thousands gathered to remember and honour the fallen soldiers in the Úz Valley. The event is being organized by the Csíkszentmárton Mayor’s Office in collaboration with Hargita County Council and Kovászna County Council. 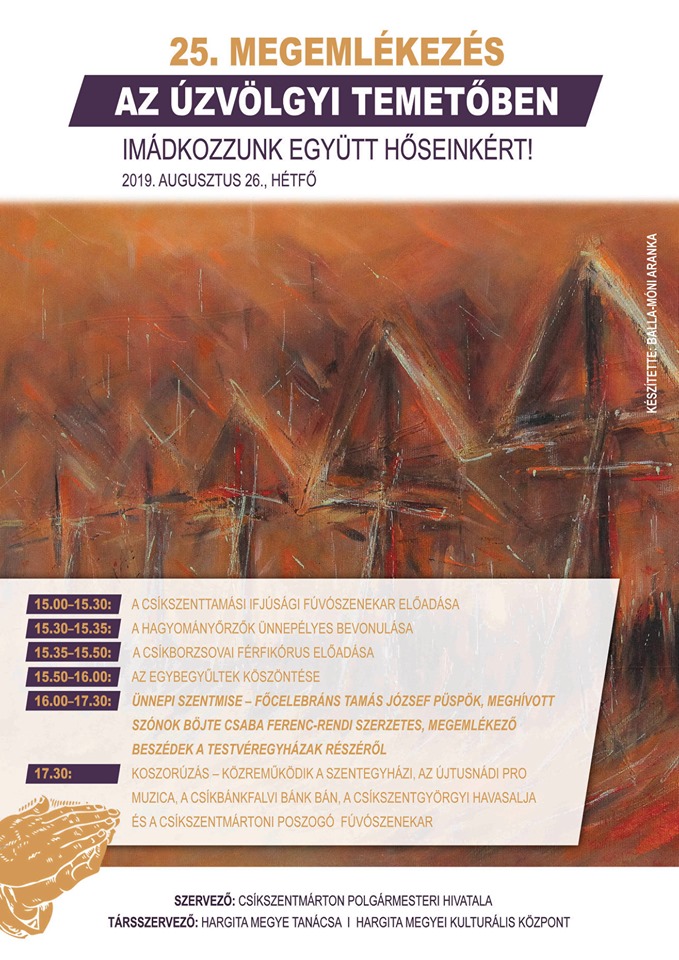