Count Claude Florimond Mercy is to this day remembered as the founder of modern Temesvár/Timișoara. Don’t let the effeminate figure in the above contemporary painting fool you: that was the preferred style of the times, whereas in fact he was a fierce and accomplished warrior.

Born in Longwy, Lorraine in 1666, the son of a military-leader baron and a countess, he joined the Austrian Imperial Army at the age of 16 and remained a soldier until his dying breath. Having lived at a time when Austria fought several wars (most notably the one that drove out the occupying Ottoman Empire), he had more than his fair share of fighting.

At the age of 17, we already find him fighting as a lieutenant alongside his father (by then a lieutenant-general) at the siege of Buda, where for his bravery Emperor Leopold I elevated him from baron to count. It was also the siege in which his father later succumbed to wounds received in the battle. We later find Florimond fighting in the Spanish war of succession in Lombardy as a lieutenant-colonel, where he was captured several times over.

In 1716, he played a major role as one of the commanders of the Pétervárad (now Petrovaradin, Serbia) battle against the Ottoman Empire, which led to the conquest of Belgrade and the subsequent bloodless retake of Temesvár from the Turks. In 1716, Eugene of Savoy, commander of the Austrian forces (he will feature once more in this story) appoints him military commander of the Bánát region (Temesi Bánság, now divided between southwestern Romania and northern Serbia).

In 1717, he was also appointed administrator of the Banat region, which remained under Austrian military rule until 1751.

Not a man to do things by half-measure, in July of the same year he sent the Imperial Chaber a Modest plan of organizing the Temesi Bánság to the greater benefit of the Empire. Once the plan was approved, he set the wheels in motion: Construction began on the city fortress, the 483-meter-long Transylvanian Barracks (the largest building in Europe at the time), and the governor’s residence in a freshly established village just north of Temesvár.

He also reorganized commerce and began the regulation of the Béga River all the way to the Danube, making it an important military and commercial waterway. He initiated the draining of the marshlands surrounding Temesvár and laid down the city plan of what is now the historic center of Temesvár, inside the former fortress, as well. Additionally, he established the silk weaving industry and ordered the planting of mulberry trees along all roads in the region in order to feed the silkworms. Many of these trees can still be seen along those roads.

His noble rank was also acknowledged and inducted in Hungary, with some properties to go with it in several counties. But military duty called several times during that period: In 1719, we find him commanding the Austrian troops in the War of the Quadruple Alliance in Sicily, while in 1733 he led the Austrian army in the Italian war theater of the Polish war of succession. Like his father, he succumbed the following year to wounds sustained while leading his troops on a siege of the Crocetta Castle near Parma. Just to remind you: He was 67 at the time. He never lived to move into his Bánát residence, which was completed the year he died while on the Italian campaign. The village where the residence is located was later renamed Mercyfalva (Mercy village) in his honor, but is now called Carani in Romanian.

He has a bust in downtown Temesvár’s Scudier park and a street named after him in the historic center, which intersects Eugene of Savoy Street. (Told you you’d hear of him again). 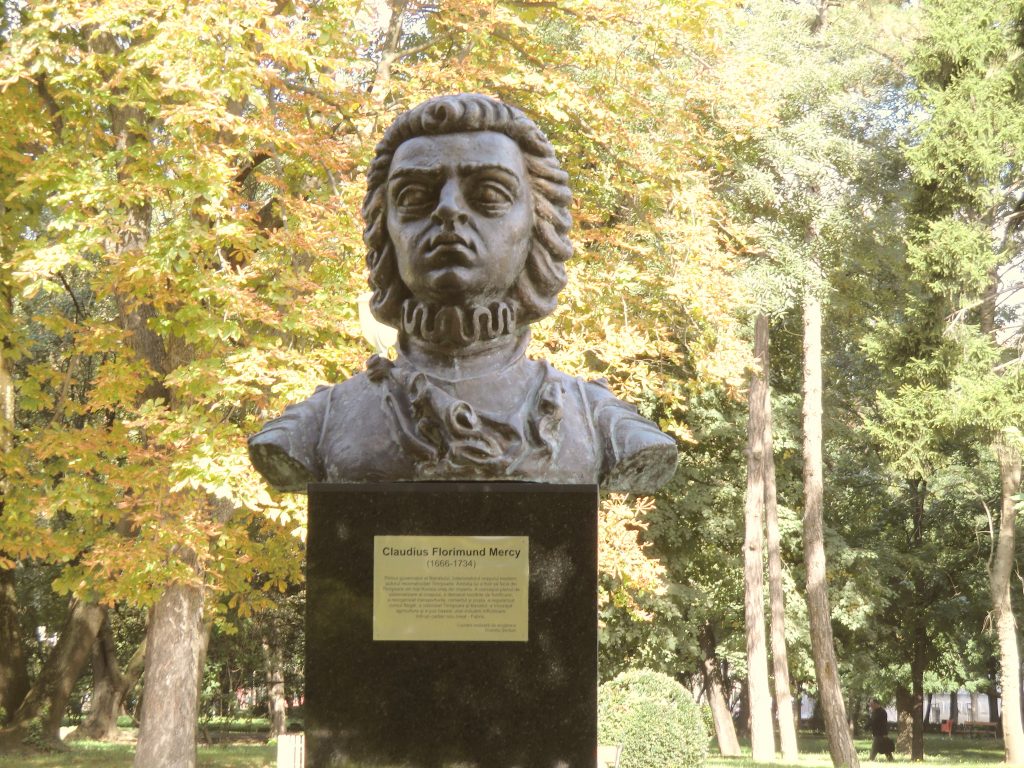 Bust of Florimond Mercy in the Scudier park in Temesvár