The number of children whose parents work abroad is decreasing

It is a known fact about Romania that many people leave the country to work abroad in the hope of better payment, work conditions or livelihood. However, we know less about the families of these foreign workers, families, parents, children and partners that were left behind with a promise of a greater life. Fortunately, at the end of last year, the number of children whose parents worked abroad decreased, a report from the National Authority for the Protection of the Rights of the Child and Adoption (NAPCRA) shows. Only one parent out of 75,136 children worked abroad at the end of last year, 13 percent less than a year before, while both parents of 13,253 children worked in another country, 16.4 percent less than in 2019, the report shows.

According to Székelyhon.ro, although the number of children in Szeklerland is not very high, the phenomenon is not unknown. According to a report from October 2020, there were 1,346 children in kindergarten or school in Kovászna (Covasna in Romanian) County where at least one parent worked abroad. In the case of 1,085 children, only one parent left to work in another country, while both parents of 152 children worked overseas. There were another 109 children registered by the national authority who are being raised by only one parent, but this parent left them to work in another country.

However, according to the Kovászna County School Inspectorate, the number of children left in the county by only one or both parents grew by the second semester of the 2020/2021 school year, reaching 1,452. Of those, 223 are still in kindergarten and 1,229 are in school. As Imola Zágoni, the representative of the Kovászna County School Inspectorate, told Székelyhon, there are cases when the parent leaves for a couple of weeks, comes back for a short time, and then leaves again. Such cases may not be reported by families, the representative stressed, indicating the fact that the real number of children left behind is unknown. 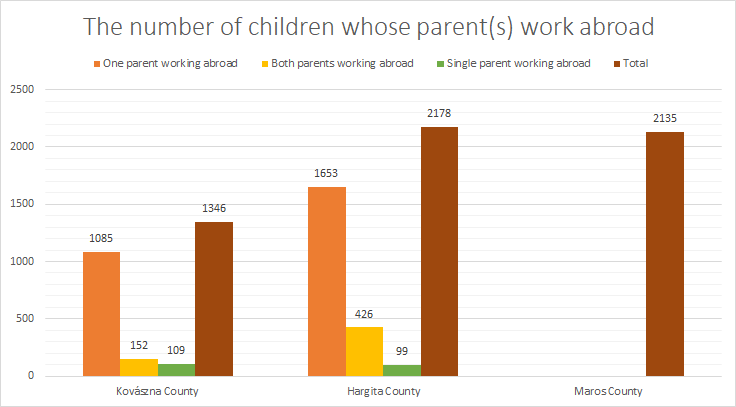 There are 2,135 children registered in Maros (Mureș) County where one or both parents have been working abroad for at least six months, Irimie-Matei Camelia, the press officer of the Maros County School Inspectorate, told Székelyhon. This number was much higher in 2017, reaching 3,914, meaning that year by year, fewer children are left in the county by at least one parent.

However, this is not the case in Hargita (Harghita) County. According to this year’s statistics of the county school inspectorate, both parents of 426 children, and one parent of 1,653 children, work abroad. In addition, in the case of 99 children raised by a single parent, this parent left the country to work somewhere else, Cristinel Glodeanu, the deputy chief school inspector, told Székelyhon. In total, at least one parent of 2,178 children worked abroad in 2021, 501 more than in 2017. In addition, in 2017, both parents of 186 children worked abroad, however, this number increased to 426 by 2021.

The consequences of absent parents

The lack of parents due to their working abroad can cause dramatic changes in the family — mainly in the lives of the children: It may have increasing negative effects on children’s development, including a higher risk of dropping out of school, behavioral disturbances, loneliness or estrangement. As Anca Stamin, the program coordinator of the Save the Children! Foundation, said recently, the pandemic intensified the anxiety of children left behind and their concern for their parents stuck abroad. The epidemic also made the life of the parents staying in Romania with their children or the life of the grandparents taking care of their grandchildren more difficult, Székelyhon reports.

According to Anca Stamin, the extent of the negative effects depends on how the parents prepare the children before leaving and how they keep in touch with them. It is very important to talk every single day and see each other via video chat. It is also important that the parents keep their promises, so if they tell their children that they will spend Christmas together, they must keep that promise. The foundation representative also stressed the importance of the person the children are entrusted to: The children and the caretaker should have a strong emotional connection before the parent’s departure. The expert recommends that the parents wait until the child reaches the age of seven before leaving to work abroad, and if they cannot wait, only one parent should work overseas.

Title image: The lack of parents working abroad can cause dramatic changes in the family, but mainly in the lives of the children. Photo: Getty Images