The New York of Kolozsvár: waiting for a brand new start

At the turn of the 20th century there was a hotel in Kolozsvár (Cluj-Napoca) unparalleled in its modern amenities, comfort, the hospitality and professionalism of its staff, the fame of its cuisine and the cultural life fizzing in its café: this was the famous New York, located in a neo-baroque palace which dominates the southwestern corner of the main square. The hotel and café had many illustrious guests throughout its history, amongst them renowned artists, politicians, writers, poets, such as Mór Jókai, Endre Ady or Ferenc Molnár.

The sight of the beautiful palace built in the era of historicism is marked by its northeastern tower, and the entrances on its two façades accentuated by bays in three axes. The palace has a rectangular base plan, the three-leveled wings being constructed around two inner courtyards. The façades overlooking the Napoca (Jókai) and the Universităţii (Egyetem) streets are divided by a plastered building plinth, a narrow cornice and a crow molding with richly profiled frieze. On the ground level the wall surface is decorated with uncut stones. On the second level of the façades balconies with wrought-iron balustrades go around.

The entrance, that once led to the café of the hotel, opens on the ground floor of the corner tower topped by a high steeple. The representative interiors were created on the ground floor, with classicizing, neo-renaissance and neo-baroque decorations. The walls of these rooms are decorated by gilded pilasters with composite capitals and cartouches, whilst stuccos forming grid lines, curves and vegetal motifs ornate the ceilings of these interiors.

The palace is actually one of the most representative architectural monuments of the city, it connects through many threads of memory to its history and one would say that it has quite a story of its own. It was built in 1893–1894 according to the plans of the architect general Lajos Pákei, in the place of another hotel, the former Nemzeti Szálló, built in the 1860’s. The New York was the first public building in Kolozsvár that had electric lighting provided by its own generator, and the inner courtyard had a glass top which could be opened and closed by an ingenious device.

The first leaseholder of the hotel was the company of Steier and Gálos from Budapest. They were the ones who had furnished the interiors for the first time, and brought furniture from the New York palace in Budapest which was also in their lease. Some are of the opinion that the hotel in Kolozsvár was named New York as well, due to the equipment and furniture they had brought from Budapest, which all had the NY monogram on them.

From 1912 the hotel had a very imaginative leaseholder, Fészl József, who had set up central heating, bathrooms, a phone line, a heated bowling alley in the building, whilst its restaurant provided meals of the French cuisine. In the representative rooms on the ground floor of the New York took form Kolozsvár’s most glamorous literary café, where the elite of the city used to gather. The café functioned as a club, a reading-room, a society games-playing court, and a venue for balls as well. 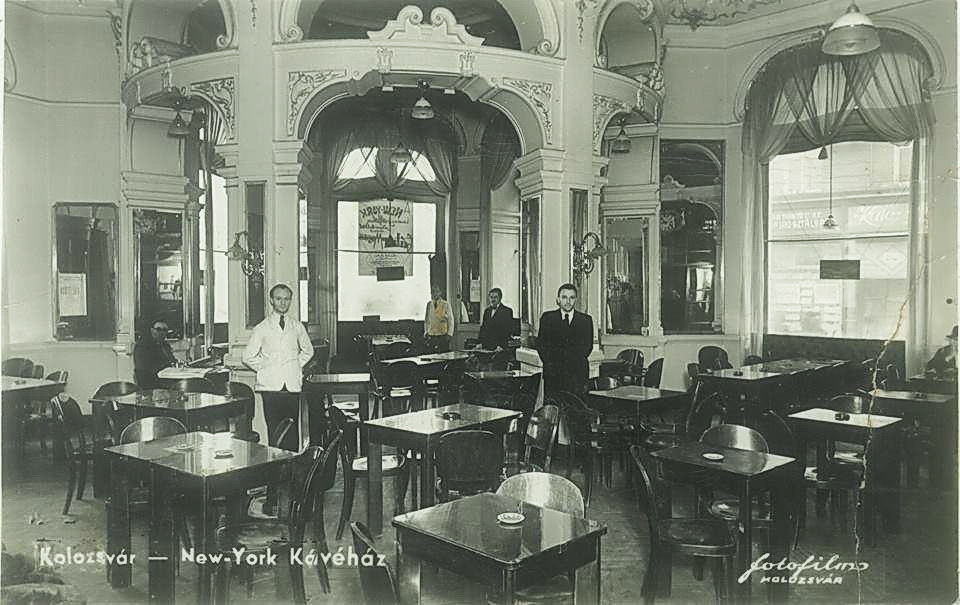 The restaurant of the New York in the 1940s. Staff members were famous for their hospitable professionalism

According to a description of that time, the members of the city’s notability dined and feasted in the restaurant, whilst Romani musicians provided the musical atmosphere for them. Law students of the university organized famous balls here, in its café journalists, actors met and argued daily, as it was a great public sphere, a kind of agora, “where the public opinion had lived.” During his visits, one of the greatest Hungarian writers, Mór Jókai usually took a room overlooking the former Belszén utca, which was hen formerly named after him. His last trip to Kolozsvár was in October 1902, when he arrived with his second wife, Bella Nagy to the unveiling of the sculpture of King Mathias Corvinus.

After 1949 the hotel was nationalized, and in the 1950’s university students were accommodated in its rooms. From the 1960’s it began to function as a luxury hotel again, under the name Continental. The Continental kept some of the former glow of the New York, its staff was famously professional. By the first decade of the new millennium the Continental’s managers apparently could not keep up with the requirements of a higher-grade hotel, thus it stopped functioning.

The past decade or so was quite an unfortunate period in the history of the palace, as the unused building decayed more and more with every passing year. Firstly it was bought by a businessman, who was sentenced to several years in prison for illegal realty-related manipulations, and who probably still has an international warrant in scope on his name. In 2013 another businessman had bought the property for EUR 5 million, who as well received an almost 4 year prison sentence for bribe and corruption, and who is still trying to escape the arms of the law.

The once glamorous palace became kind of a ghost hotel: the plaster, the stuccos, the ornaments in the once so impressionable rooms were almost totally destroyed by the moisture; parts of the second floor’s ceilings had dropped, and became dangerously unstable.

The press and the public opinion were quite stirred in December 2015, when a piece of the façade’s decaying plaster had injured a passer-by. The owner’s legal status is still unclear, but his company somehow started in 2016 restoration work on the building, and the fact is, that by last year the roof was changed, the structure was consolidated, the façade windows were changed, the stuccos redone.

As it is not open for the public, the state of the interiors is not really known; the owner declared to one of the local online portals, that he is planning to restore and redecorate this year the inner parts as well. Hopefully, there will be again people in the future of this palace who would recognize the great potential of the former New York and who would be capable of implementing a rational investment plan, and living as law-abiding citizens as well…

Title image: The imposing neo-baroque palace stands in the southwestern corner of the main square