The Bánffy-palace: A connection between past and present

On the east side of the main square of Kolozsvár (Cluj-Napoca, Klausenburg) stands one of the most representative historical buildings of the city: the Bánffy-palace, built between 1773–1786 for governor György Bánffy. He was one of the most educated Transylvanian aristocrats of his age, a follower of the ideas of the Enlightenment. Some art historians presume that the fastidious sculptural decorations of the palace reflect a distinct iconographic program determined by the governor, who was probably an adept of freemasonry, and who attempted to symbolically suggest the wholeness and harmony of the world.

The attic of the main façade is decorated by eight urns and six figural sculptures related to ancient Greek mythology: the hero Perseus, Apollo (the god of music and poetry, that of light and of healing), Ares (the god of war), Pallas Athena (the goddess of wisdom, handicraft and warfare), Artemis (the goddess of the forest, that of hunting, archery and that of the Moon). On the balcony the artist, who realized all these sculptural elements, Anton Schuchbauer, sculpted the family’s coat of arms with griffins. The sculptures of these mythic animals can be seen on the palace’s back façade as well: on this side the balcony is supported by three griffins. On the first floor loggia overlooking the inner courtyard the sculptor placed the symbolic figures of the four seasons and that of four continents (Europe, Asia, Africa and America). The semicircular frames of the openings to the main balcony are decorated by the allegoric, putto-like busts of the four main elements, Fire, Water, Air, Earth.

In 1790 the governor moved the seat of his office, the Gubernium from Nagyszeben (Hermannstadt, Sibiu) to Kolozsvár, so the highest ranking leaders of Transylvanian public and political life began to build their own city palaces in Kolozsvár as well, inspired by the architectural language and design of the Bánffy-palace.

The palace, designed and built the by German architect Johann Eberhard Blaumann is definitely one of the most representative baroque palaces in Transylvania. The plan of the building was most probably worked out with the contribution of  György Bánffy himself, and actually the whole construction shows the governor’s keen sense of style, his approach to art and architecture and of course his wish to represent status and power. The governor’s rooms were on the first floor, and archives tell the story of the most luxurious life he had led. Even the Habsburg emperor, Franz the I. and his wife, Caroline Augusta were the guests of György Bánffy in 1817. Later on, emperor Franz Josef visited Kolozsvár in 1852 and 1887, and he as slept in the guest rooms of the Bánffy-palace.

The architect designed a palace plan in form of a rectangle with an inner courtyard. The  main façade looks to the west, and is dominated by the centrally placed balcony with composite columns. The chambers in the eastern and western wings are double-breasted, in the side wings they are placed on a singular axe. In the second courtyard, behind the palace were the stables, the coach house and the habitations of the personnel. The inner courtyard is surrounded by an arcaded loggia on the ground floor, and a loggia with ionic colonnade on the first floor. The original furniture of the palace is unfortunately long gone, but the wall lining, the beautifully decorated door frames and window-lunettes, some of the mirrors are still in place in the representative chambers. Urban legend says that there is even a secret passage built in the palace, which was accessible from the governor’s chambers. 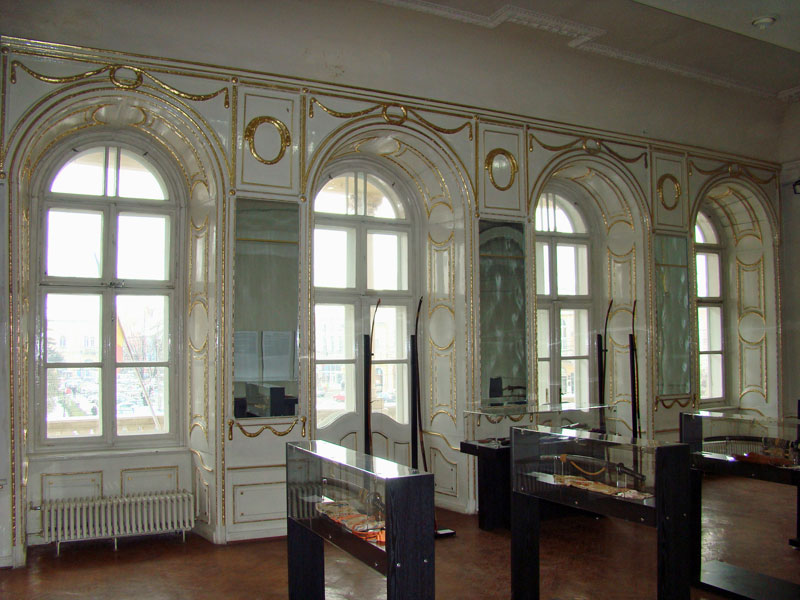 One of the representative chambers of the palace, now used by  the museum

After the death of the György Bánffy in 1822, the palace served for a while as the governor’s residence, some parts of it were rented out to small businesses. Unfortunately the family line of György Bánffy became extinct, and the palace was inherited by an other line of Bánffy relatives. The last member of the family that owned the palace was Dénes Bánffy, who had to move out to an apartment in the outer neighborhoods of the city in 1948 when the palace was nationalized.

Ever since 1962 the palace is the home of the Art Museum of Kolozsvár, which is supported by the county council. The last Bánffy had no descendants, who could have asked for the restitution of the palace. The peculiar situation is though, that there still is a quite shady legal claim on parts of the palace, but the authenticity of the documents that should prove that the last owner donated them to these people is very questionable.

In any case, the Bánffy-palace and the Art Museum are definitely compatible as purpose, function and community value as well. Last year restoration work on the main façade begun with the help of the city council, and it will be finished this summer. The museum’s chambers were renovated as well, but there is still a lot to be done on the courtyard and back facades of the palace. The museum has around 14 000 pieces of artwork and the manager is a historian, Lucian-Nastasă Kovács, who is determined to make the museum a lively institution, strongly connected to the city’s community.

Title image: The main façade of the palace overlooking the central square