Two museums of Kolozsvár/Cluj Napoca, the Ethnographic Museum of Transylvania and the Art Museum of Kolozsvár/Cluj-Napoca have been favorably assessed by the experts of Michelin, who decided to include them in the renowned guide. Thus the two museums in Kolozsvár are among the 12 museums of Romania, selected to be included in the famous annual guide dedicated to tourism and gastronomy.

The “Romulus Vuia” Ethnographic Museum is recommended by the experts for its important collections and their modern exhibition style and is considered one of the most beautiful museums of this type in Romania. The presentation of the objects is structured according to the most important occupations but also on the special collection of traditional costumes from different corners of the country.

Founded in 1922 by professor Romulus Vuia, the Ethnographic Museum of Transylvania entered the elite of the Romanian ethnographic museums due to the exceptional quality of its patrimony. It is currently composed of over 41.000 traditional peasant objects from the 17th-20th centuries and a documentary fund of over 80.000 items.

The museum has two sections: the Pavilion Section and „Romulus Vuia” ethnographic Park, the open-air section.

The Pavilion Section functions in the „Redut” Palace – a historical monument that dates since the 16th century and which housed during 1848-1865 the Transylvanian Diet. Also here, in 1848. 30th of May the Union of Transylvania with Hungary was stated. 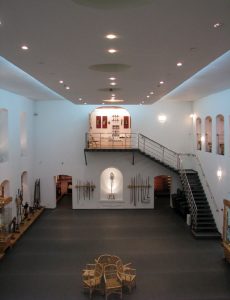 Inside of “Redut” Palace, Photo: adatbank.ro

On the other hand the Bánffy Palace building, that houses the whole collection of paintings, and objects of decorative art of the Art Museum impresses through its architecture, having the status of being the most important Baroque monument in Romania.

The Art Museum of Cluj-Napoca is a public institution of culture whose mission is to preserve, research and put forward the real and virtual patrimony of local and universal art. With a collection of over 12,000 paintings, sculptures, graphic art objects and decorative pieces, it is considered one of the most important museums in Romania.
Founded as an institution in 1951, the museum has been operating since 1956 in the Bánffy Palace – a building which was built based on the plans of the architect J.E. Blaumann during the years 1774-1785, its destination being that of residence for the governor of Transylvania. 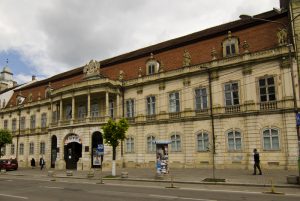 The annual number of people visiting the two institutions is constantly growing. In 2018 over 67,000 visitors have admired the valuable exhibits hosted by the Ethnographic Museum of Transylvania, while over 64 000 persons have crossed the threshold of the Art Museum of Kolozsvár.

In the top museums listed by the Michelin specialist there are included 10 more museums in Romania: three in Bucharest – National Art Museum of Romania, Museum of the Romanian Peasant, the “Dimitrie Gusti: National Village Museum, two in Nagyszeben/Sibiu, the ASTRA Museum and the National Brukenthal Museum, two in Máramarossziget, the Memorial for the Victims of Communism and Resistance, the Village Museum of Máramaros/Maramureș, the History Museum of Nagybánya/Baia Mare, the History and Archaeology Museum of Kostanca/Constanța, the Cultural Palace of Iași, a building, that hosts 4 important museums.