Hunor Kelemen is the candidate of the RMDSZ, the Democratic Alliance of the Hungarians in Romania in the presidential elections to be held this November. The so called mini-parliament of the party, the Council of the Alliances’ Delegates (SZKT) has decided on the 30th of August in Marosvásárhely (Târgu Mureş) on the politician’s candidature, who is the leader of the RMDSZ and a deputy in the Romanian parliament.

For the Hungarian community of Transylvania it has become a matter of honor to run with their own candidate in the presidential elections, as this is a good way of pointing out that Hungarians are equally important constituents of the Romanian society and political community – Kelemen said in front of the delegates of the Alliance. On the other hand, the experiences of the past decades definitely showed that no other presidential candidate would speak about the objectives, the expectations and the problems of the Hungarians in a way that it would best suit the community – he added. Last, but not least, a presidential campaign is an outstanding opportunity for the RMDSZ, the only party representing the Hungarians in the Bucharest parliament to convey the standpoints and objectives of the Hungarian community to the larger society.

The party leader was elected presidential candidate with 107 votes out of 111. He had promised an outspoken, somewhat off-handed, high-spirited campaign, without taboos and provocations.

”Unfortunately, there still are people in this country who are disturbed by Hungarian signs and inscriptions, who disapprove of the Hungarian-language schools, who are against the usage of the symbols of the Hungarian community, but I would like to believe, that they are not as many as loud as they can be sometimes” – said Hunor Kelemen. Due to these approaches, the Hungarian community in Romania lately had to focus much more on defending itself then on building and development. Thus, the keyword of the electoral motto of the RMDSZ’s presidential campaign is “Respekt” – a word that can be understood by everybody.

The party wants to emphasize throughout the campaign, that the very much broken and damaged respect needs to be restored in the country: on one hand, citizens need to regain their respect towards the rule of law, in the state itself; on the other hand this can be achieved if the state’s institutions show respect towards the citizens – explained Hunor Kelemen. Respect also should prevail between the different ethnic communities of Romania, as mutual respect would help in accepting each other’s values and eventually it might strengthen mutual trust as well.

“We want to emphasize, that Romania should vote on a presidential candidate who would be aware, that the country’s president can use the authority of this position to help restore trust between communities and the prestige of Romania” – pointed of the leader of the RMDSZ. He added: the Hungarian community would like to live in a “green, smart and wise Romania”, a country that is respected in Europe, and which respects its own national communities, is not afraid of them, and allows them to preserve their values, thus contributing to the mutual development. 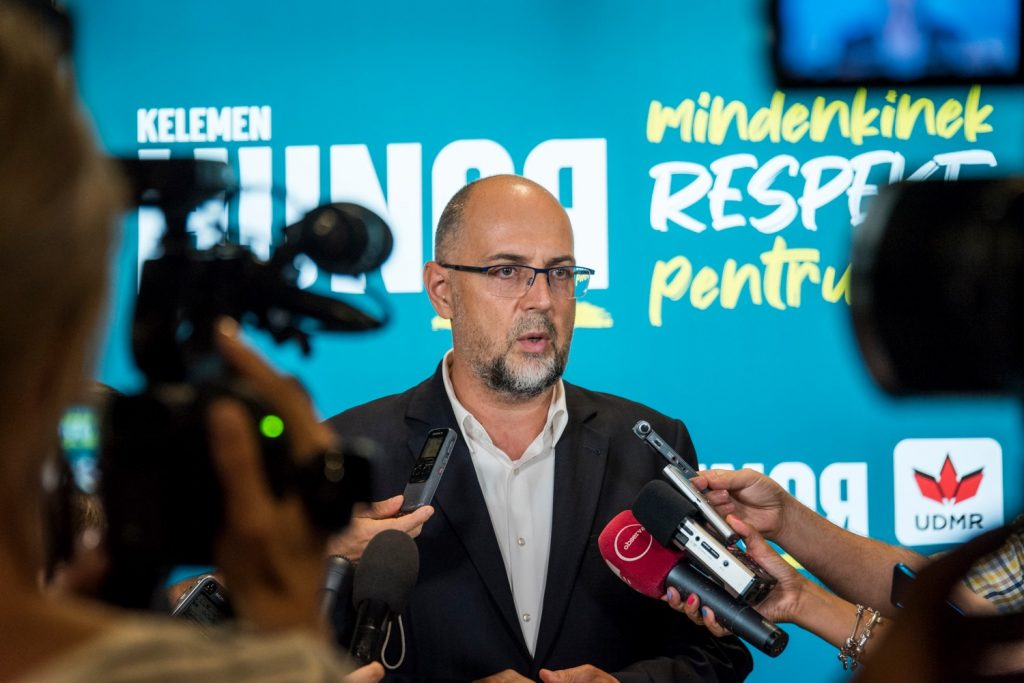 Hunor Kelemen: The country should have a president who is aware that this position can be used to help restore respect, trust and solidarity in society

The assembly of the delegates of the Alliance has decided on the structure of the party’s leadership as well. The re-elected executive president, campaign strategy specialist, Bálint Porcsalmi has highlighted the fact, that he and his team of seven vice-presidents are committed to making the party on of the most modern political organizations of Central-Eastern Europe. A new position was assigned as well, Csilla Hegedüs, the executive vice-president of culture will also be the spokesperson of the party.

Hunor Kelemen has once again pointed out to the representatives of the media, that RMDSZ will not support in parliament the government of the Social Democratic Party (PSD) and will back the vote of no confidence of the opposition if this will be handed in. He recounted that after the 2016 parliamentary elections RMDSZ undertook a parliamentary collaboration agreement with the social-liberal governing coalition in order to let the field open for Romanian-Hungarian dialogue; as he said, the open channels were of importance mostly in the year of the centenary commemorations of the Gyulafehérvár (Alba Iulia) Declaration of 1918. But Hungarian-Romanian dialogue has nevertheless failed in the case of the Úz-valley military cemetery, thus RMDSZ has withdrawn their political support of the governing parties.

At this moment, the Social Democrats lead by PM Viorica Dăncilă have lost their majority in parliament, their coalition partner, the ALDE has left the government, thus the PM now needs to ask for the parliament’s approval on the cabinet’s changed structure. Hunor Kelemen stated, that in a normal democracy, if a cabinet loses majority just steps down, and lets those to govern, who have that majority. He emphasized that a prolonged political crisis just increases economic insecurity in the country. The RMDSZ now starts the presidential election campaign, having in mind, that the Hungarian community has to be able to prove its importance and political weight not just in the upcoming presidential, but in next year’s municipal and parliamentary elections as well.

Health Minister: The extension of the state of alert is inevitable

Health Minister: The extension of the state of alert is inevitable