The highly anticipated moment is here: Pope Francis arrived at Bucharest airport at 11:30 a.m. local time to begin his Apostolic Journey entitled “Let us walk together!” in Romania. The Holy Father was welcomed by President Klaus Iohannis and his wife at the Henri Coanda International Airport. Pope Francis’ tight schedule includes eight speeches in just three days in front of political and religious authorities, the beatification of seven Greek-Catholic martyrs, and a meeting with the Roma community.

The official reception ceremony will start at noon at the Cotroceni Presidential Palace, where the Holy Father and the president will talk in private, followed by a meeting with Prime Minister Viorica Dăncilă and other authorities. 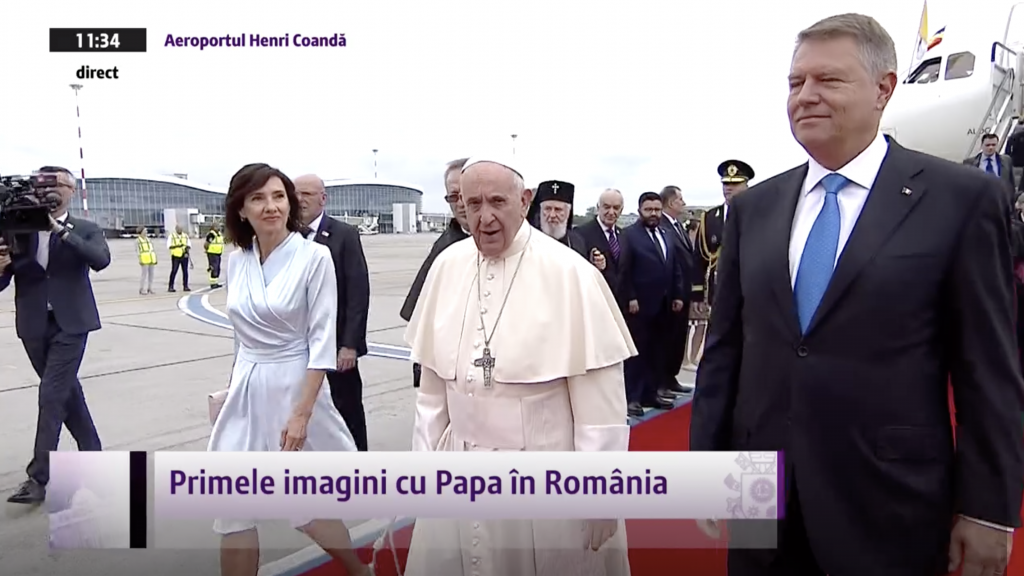 On Friday, Pope Francis will have a private meeting with the Patriarch of the Romanian Orthodox Church, followed by a meeting with the Holy Synod of BOR. At 5:00 p.m. the Holy Father will go to the National Cathedral and, from 6:10 p.m., attend the Holy Mass at the Catholic Cathedral of Saint Joseph.

On the second day of his visit, the Holy Father will travel to Csíksomlyó/Sumuleu Ciuc, where he will celebrate the Holy Mass at 11:30 a.m. at the remodeled Hármashalom altar, the location of the largest religious and ritual event of Catholics in the Carpathian Basin, on the Pentecost Pilgrimage of Csíksomlyó/Șumuleu Ciuc. A massive Székely gate awaits the pope and the pilgrims arriving there for the Holy Mass. Pilgrims with smartphones are encouraged to download the booklet containing the process of the Mass, the songs, and a short description of the Holy Father from here [Pilgrims’ Booklet download link].

In the afternoon, Pope Francis will travel to Jászváros/Iași to visit the “Queen Saint Mary” Roman Catholic Cathedral in Iași at at 5:25 p.m. and then use the Popemobile to travel to the Culture Palace Square to attend the “Marian Gathering” with young people and families at 5:45 p.m.

On the last day of the Apostolic Journey, Pope Francis will arrive in Balázsfalva/Blaj, where he will attend Divine Liturgy, beautifying seven martyred Greek-Catholic bishops.

Pope Francis arrives in Romania twenty years after John Paul II’s historic visit. He chose the generic title of “Let us walk together!” Pope Francis’ state visit to Romania, which includes eight speeches in just three days in front of political and religious authorities, the beatification of seven Greek-Catholic martyrs, and a meeting with the Roma community, which has a strong Marian imprint.