On the Csango Council’s meeting (a forum uniting the Hungarian cultural organizations in Moldavia) held in Klézse/Cleja on Saturday the symbol donation of the Transylvanian Heraldic and Vexillological Association was unanimously accepted. András Duma, the president of the organizer Szeret-Klézse Foundation, the moderator of the Csango Council emphasized: they yearned for their own symbols for the last 15 years, now they have them, and these symbols will unite the Csangos, who thus can help each other and be more effective. At the meeting it was also expressed that this could be the very last chance to save all that can still be saved, otherwise the identity of this ethnic group could be lost forever.

János Antal, the president of the Phoenix Cultural Association from Forrófalva/Faraoani, whose family was persecuted for eighteen years for conspiracy said that with the support of the Hungarian Folk High School Collegium and the Hungarian state they were able to buy a property in Nagypatak/Valea Mare, where they will build a Hungarian House, he hopes, until the end of the year. He considers very important for the children to go to Hungarian kindergarten and to learn Hungarian as an after school program too..

Tinka Nyisztor ethnographist, the leader of the Szent István Association from Pusztina/Pustiana emphasized the importance of mothers to speak Hungarian with their kids at home, otherwise all endeavor will be in vain. Praying in Hungarian is also very important. Attention must be drawn to the Hungarian religious education also. She indicated, that there is a Csango museum in Zabola/Zăbala thanks to Ferenc Pozsony academician but there is none in Moldavia. There would be need for one so that they could show off their values. 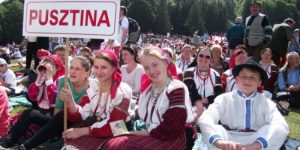 She also came with good news: there will be a Hungarian prayer held in Pusztina every Friday at 3 p.m.. And also it must be organised, that for the monthly Mass permitted in Bakó/Bacău since January Csangos from all the region to be transported. She emphasized the importance of collaboration. Only this way the Csango culture could be handed over for future generations.

Tamás Fodor, consul general of Hungary at Csíkszereda/Miercurea Ciuc assured the Csangos of the support of Hungary, indicating that from now on he is the one responsible for the communication with the Csango organization.  Botond Gelei, the office manager in Bákó of Zsigmond Járai, commissioner of the Prime Minister entrusted with the coordination of Csango-Hungarian cooperation informed that in the Hungarian House in Bákó three classrooms await the ones participating in he Hungarian education after school and here is a place also for prayer in the building. They are planning to establish thirty new Hungarian Houses in Moldavia.

The plan for the Csango coat of arms

István Attila Szekeres, heraldist from Sepsiszentgyörgy/Sfăntu Gheorghe made plans of symbols for the Hungarian Csango community, presented them at the forum and handed them over as the donation of the Transylvanian Heraldic and Vexillological Association and was unanimously accepted by The Csango Council. “The coat of arms and the flag of the Csango Hungarians is a shield quartered by a silver cross in red and black and also a textile in a rectangle form which, in its first field has a gold sun and in the second one a growing silver crescent. The colors of the coat of arms and the flag display the most commonly used colors in the Csango national costume, while the sun, the moon and the cross are ancient Csango symbols.” 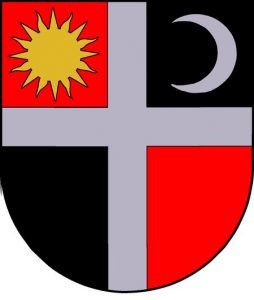 Besides the resolution accepting the symbols, the Csango Council worded recommendations towards the decision makers. They ask for the establishment of the Csango Ethnographic Museum, the starting of the professional training of the teachers instructing the Hungarian traditions and also that religion should be part of the Hungarian Educational Program in Moldavia.