A memorial center dedicated to Szekler border guards was inaugurated last Saturday in the Hargita County town of Csíkszépvíz (Frumoasa) with the support of the Hungarian government. The Szekler border guards defended the eastern frontier of the Hungarian kingdom for centuries, and the newly founded institution hosts the first permanent exhibition of military history in Szeklerland. “The Szekler Border Guard Memorial Center is not just an exhibition on the theme of military history, but a reference point, a shining beacon for the generations to come, who wish to have a thorough knowledge of the past of the Hungarian nation,” noted János Árpád Potápi, Hungarian Secretary of State for Hungarian Communities Abroad at the inauguration ceremony. On this occasion, the politician was offered the honorary citizenship of Csíkszépvíz for helping the municipality in achieving its goal. 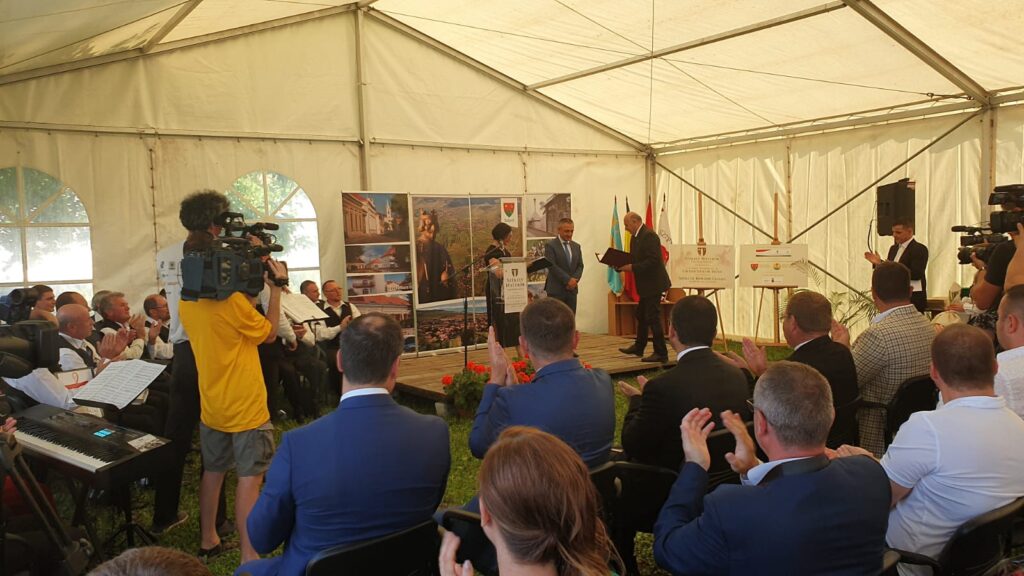 The interactive exhibition occupies nearly 600 square meters and presents the history of Szekler border guards from the time of the Árpádian Kingdom until World War II. History is revived with reconstructions of objects and locations, animations and movies, maps, paintings, copies of historical documents, photographs, and interactive walls. During the tour, visitors can observe life-size Szekler warriors of different eras, their equipment and weapons. The allies and opponents of Szeklers from different time periods are also displayed, which helps one appreciate the quality and performance of the Szekler military organization. The information is available in three languages — Hungarian, Romanian and English — and the memorial center is open every week from Tuesday to Sunday from 10 a.m. to 5 p.m., the Székelyhon news portal wrote.

“This center commemorates our ancestors, as Szépvíz was a border settlement, and the people who lived here defended the border for centuries,” Tibor Ferencz, the mayor of Csíkszépvíz and the initiator of the project said at the inauguration. In addition, the Szekler Border Guard Memorial Center is intended to be a tourism investment, on which several other services can be built; thus, it represents an economic potential for the settlement, the mayor noted. More than 60 experts — local historians, archaeologists, military historians, filmmakers and museologists — compiled the material for the exhibition, he added.

The center was established in a building owned by the municipality which was used as a nursing home during the decades of communism. Nearly EUR 1 million was spent on the renovation and furnishing of the building, and the Hungarian government supported the investment with close to EUR 600,000.

In his inauguration speech, Secretary of State Potápi quoted the thoughts of the renowned Szekler writer Áron Tamási regarding the “spiritual empire” that unites Hungarians scattered all around the world. “Tamási himself was a spiritual warrior of the Szekler community. In his writings after the Treaty of Trianon [ed. note: the 1920 treaty that assigned two-thirds of Hungary’s territory to other countries] Tamási did not focus on the fragmentation, the catastrophic situation of the Hungarian nation; instead, he tried to attract attention to the spiritual, moral community, which transcends borders and can connect Hungarians even in times of misery,” the Hungarian secretary of state said.  As he noted, this new center can be seen as a memento of survival and can serve as a lighthouse for future explorers who want to get to know the past, get in touch with the cross-border spiritual community that unites the Hungarians of the world.

“Let’s hope that if providence has kept Tamási’s people so far, Szeklers will not disappear hereafter either,” Potápi added.

Barna Tánczos, member of The Democratic Alliance of Hungarians in Romania (known by its Hungarian acronym RMDSZ) and minister for the environment, assessed that in recent years, with the help of the Hungarian government, Hungarians all over the Carpathian Basin have decided they had waited long enough and started to inaugurate memorial sites that prove that they have many things to be proud of from the history of the past 1,000 years; and they want to pass these memories on for the centuries to come.

According to the president of the Hargita County Council, Csaba Borboly, today’s Hungarians have to face different challenges than their predecessors. “The Hungarian government must persevere against the pressure coming from Brussels regarding the protection of community values, while in the east, it must protect Szeklerland: not with weapons, but with lawsuits, petitions and amendments to legislation,” Borboly said. “In this work, we can be strengthened by this memorial site, in this work we have to work together with a responsible Hungarian government, which stands by us and with which we can plan a Hungarian future,” the politician added.

Title image: The permanent military exhibition is dedicated to the Szekler border guards who protected the eastern frontiers for centuries. Exhibit in the Szekler Border Guard Memorial Center

Kelemen: Ludovic Orban’s comments are “stupid” and unworthy of a party leader