Kolozs County has the largest budget in Romania

Kolozs/Cluj County Council is the first in Romania in terms of absorption of European funds, meaning that the county has the largest budget in the whole country, national news portal Ziare reports.

According to Cluj County Council president, Alin Tișe, the greatest achievement of this mandate is having had attracted no less than 250 million euros for roads, schools and hospitals and 355 million euros for developing the water and sewage network in the county. “It is the largest budget in the history of this county and is number one in Romania”, he said.

Cluj County Council implements 25 European projects, funded by the Regional Operational Program 2014–2020 (almost 75% of the whole funding) and several other EU programs, the Large Infrastructure, Environmental Sector and Administrative Capacity Operational Programs (25%). The CJ Cluj representatives underline, this value is the highest amount of non-reimbursable funds absorpted in a year in the history of the county administrative court.

The county’s budget for 2019, RON 2,16 billions, is the largest in Romania, a significant percentage of total revenues are EU funds.

Romania is, however, not among the first ones in terms of absorption of European funds. According to the European Commission’s website Romania, through 8 national programs, benefits from European Structural And Investment Funds (EFIS) EUR 30.8 billion, representing an average of 1 548 euro per person over the period 2014-2020. Until the end of 2018, the country spent 24% of the allocated budget, EUR 8,7 billion from 30,8. 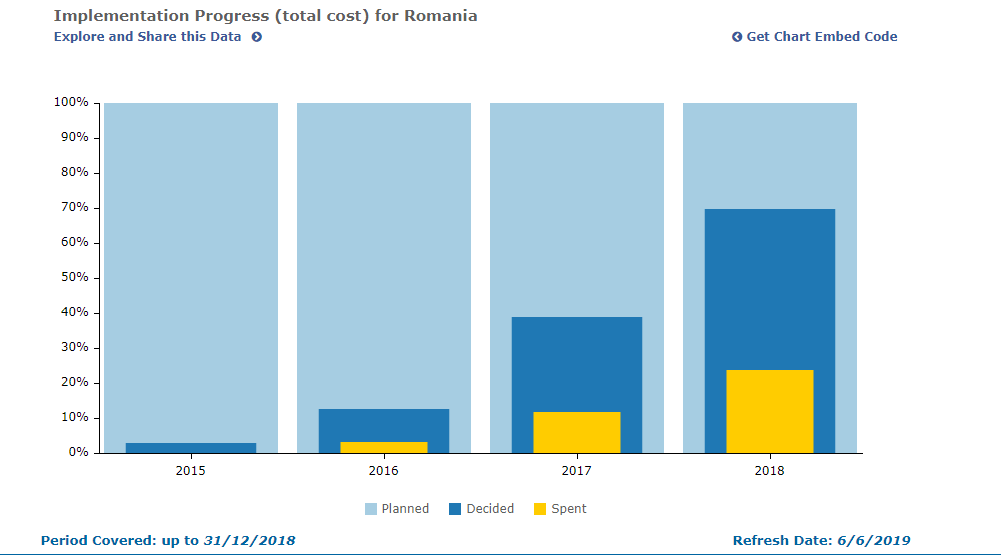