If you are driving past Tövis/Teiuș in Fehér/Alba county, there is one construction marvel that will surprise you: half of a Dacia Logan built into a house so it looks as though someone was trying to park on the first floor but somehow missed the balcony and crashed into the house wall and ended up with its front half lodged into the bedroom.

When you look at this “innovative” house design, you start wondering about the reasons why one would ever think of using half a car as an extension. According to Adevarul, the man did this because he likes to provoke. 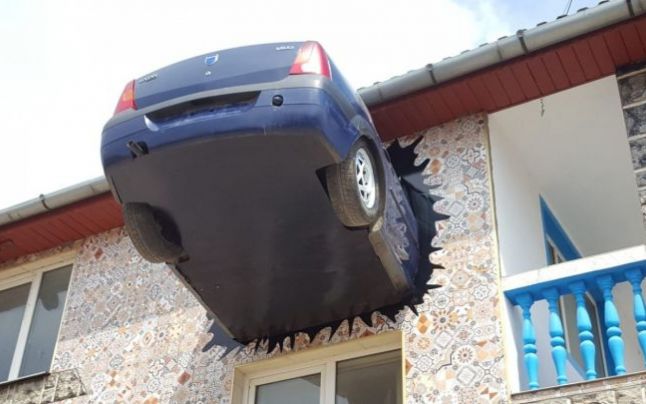 So he dreamed about this provocative construction and managed to finalized it within six months, by purchasing the visible half of the Dacia Logan part by part. The Logan is a car built by Automobile Dacia S.A., a Romanian car manufacturer now owned by the Renault Group. The car model was chosen because of its price, the Logan being one of the least expensive cars on the Romanian market.

When all the parts had been assembled, the half Dacia Logan was lifted to the first floor of the house with a crane and secured to the wall with a steel frame. Now it’s the key attraction of Tövis village, showing how a half-Dacia can become a domestic ornament. Are you considering using this construction marvel yourself to attract the attention of internet citizens towards your area? Bear in mind though that you will probably also need a crane to wash the car every now and then.

Title image: the house and the ornament. Image source: Adevarul.ro

A record number of cars were produced in Romania last month