Several architectural elements of historical importance were discovered a few days ago in the Unitarian church of Magyarszovát (Suatu), the Hungarian Unitarian Church said in a press release. One of the most valuable pieces found during the structural renovation of the medieval church is an arch-stone decorated with the striped coat of arms of the former Hungarian Kingdom. The stone bears an inscription written with Gothic letters in Latin that reads: “Arma Regni Hungariae,” meaning “The coat of arms of the Hungarian Kingdom.”

The ongoing renovation of the church is focused on the structural reinforcement of the building. Furthermore, art historians and conservation specialists are working on the project to identify various elements of the original, 14th century Gothic vault, such as the stone ribs, consoles and arch-stones. That is how the keystone depicting the royal Hungarian coat of arms was found. Moreover, researchers pointed out that other medieval architectural details will likely come to light as the restoration continues.

The renovation work is being supported by the Flóris Rómer Plan of the Hungarian Government and the Romanian National Institute of Historical Monuments.

The village of Magyarszovát, located 36 kilometers east of Kolozsvár, in the historical Mezőség Region of Transylvania, is known for its popular traditions, folk dancing and nature reserve, home to 400 rare species of plants. A flower called Astragalus peterfii (known by its Hungarian name, Péterfi-csüdfű) can only be found in this protected area. 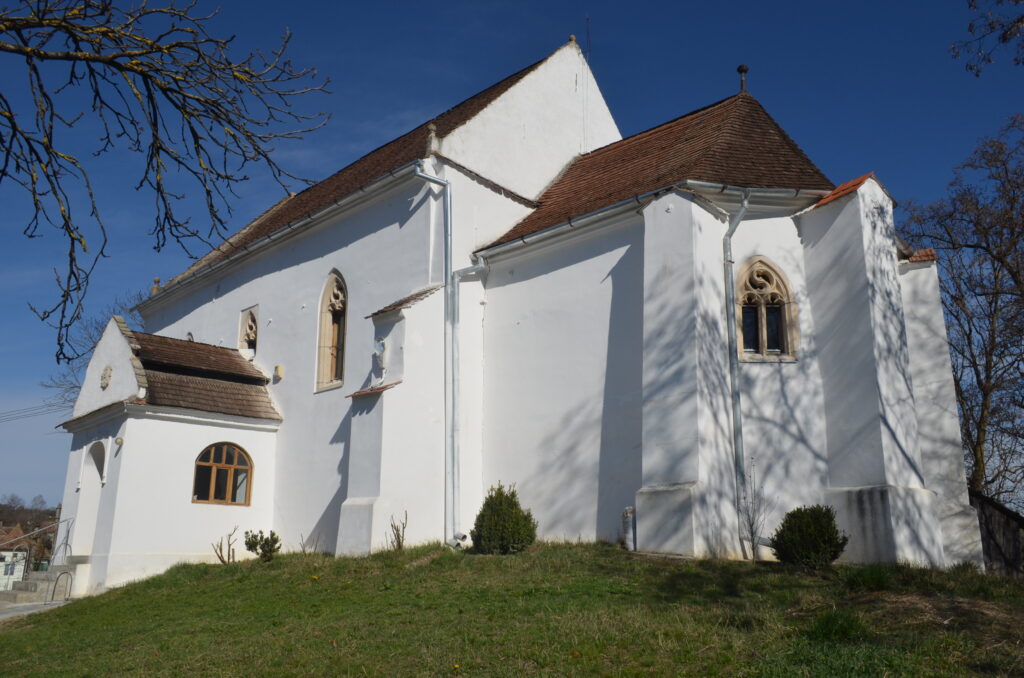 In the Middle Ages, the manor of Magyarszovát belonged to the Sukys, a Transylvanian Hungarian noble family who commissioned the building of the church in the first decade of the 14th century. The church was then reconstructed in the 15th century, thus the building standing today shows mostly the 15th century form.

The 14th century church had been expanded with an ornate Gothic vault, fine stone carvings and frescos. Unfortunately, only three fragments have remained from the ambitious decorations. According to art historians, a rare Last Judgement scene was also depicted on one of the walls. Alas, the valuable fresco was destroyed in 1925, during a renovation.

In the nave of the first medieval church, the four consoles supporting the vault were adorned with the coats of arms of the two branches of the Suky family, while the arch-stones of the vaults were decorated with the royal crest of the Hungarian Kingdom from the time of Sigismund of Luxembourg, the papal insignia and the painted coats of arms of the family. Furthermore, small statues of saints were carved in several consoles supporting the ribs of the vault.

The last major refurbishment of the church was carried out in 1790, financed by a member of the patron family, László Suky. The Gothic vault (probably damaged by the earthquakes of the 18th century) was dismantled and replaced with a plain ceiling. The southern and northern porches seen today were constructed with the stones of the vault and the sacristy, which was also demolished.

One of the keystones depicting the Suky coat of arms was placed above the southern medieval church entrance in 1790. The former 14th century keystones depicting the papal coat of arms and the Hungarian royal crest with the dual cross had been lying in a desolate state in the nearby cemetery until recently, when they were moved to one of the porches. These pieces were restored in 2013, with the support of the László Teleki Foundation.

Title image: One of the most valuable pieces found was an arch-stone with a Gothic inscription and the coat of arms of the Hungarian kingdom, bearing a striped shield