Unveiling the secrets of the 1497 Old Testament

Restoration works on the 15th century Old Testament found in June have begun in the workshop of the Csíkszereda (Miercurea-Ciuc, Szeklerburg) archives of the Gyulafehérvár (Alba Iulia, Karlsburg) Roman-Catholic archdiocese – reported recently the Székelyhon news portal.

The sensational discovery of this half a millennium-old document had been made in the beginning of June: that’s when the archivists of the Csíkszereda archives had found an Old Testament printed in 1497 in between the books of the parish of Csíkszentgyörgy (Ciucsângeorgiu, Sankt Georg) that had been previously brought to the Csíkszereda collection.

The Old Testament had been authenticated by an old book’s specialist as a very rare incunabulum, and it is actually one of a kind in Transylvania and Romania. Rita Bernád, the chief archivist of the Gyulafehérvár archdiocese’s archives had informed the media that the document is the 3rd volume of a Bible consisting of originally 4 volumes. The last pages of this specimen of the Old Testament are missing, and from the total of 15 illustrations 11 are left. On the other hand, the incunabulum had been preserved in quite a good state.

The Old Testament part of the Bible is otherwise composed out of 46 books; this  incunabulum contains the books of the prophets: Isaiah, Jeremiah, Lamentations, Baruch, Ezekiel, Daniel, Hosea, Joel, Amos, Obadiah, Jonah, Micah, Nahum, Habakkuk, Zephaniah, Haggai, Zechariah, Malachi, and the I. and II. books of the Maccabees.

The 1497 Old Testament has been procured by the priest of the Csíkszentgyörgy parish, György Ferenczy. Historians have some data concerning him; it is known, that he was born in 1690 and was of noble origin. He had studied in Hungary, at the University of Nagyszombat, and in 1719 he obtained a PhD in theology. After finishing his studies he became the vicar of Csíkszentgyörgy. He served only a decade though as a priest in the village, as in 1727 he had performed an exorcism with outrageous consequences, which was considered to be an erratic act, and the bishop probably suspended him.

The priest had most likely procured the Old Testament during the years of his theological studies, and according to the owner’s entry written in Latin on the inside of the upper book cover, he took it to a book-binder in 1721. After he died, the volume was kept in the book collection of the village parish, until last November, when it was taken to the library of the Csíkszereda archives with the other books. 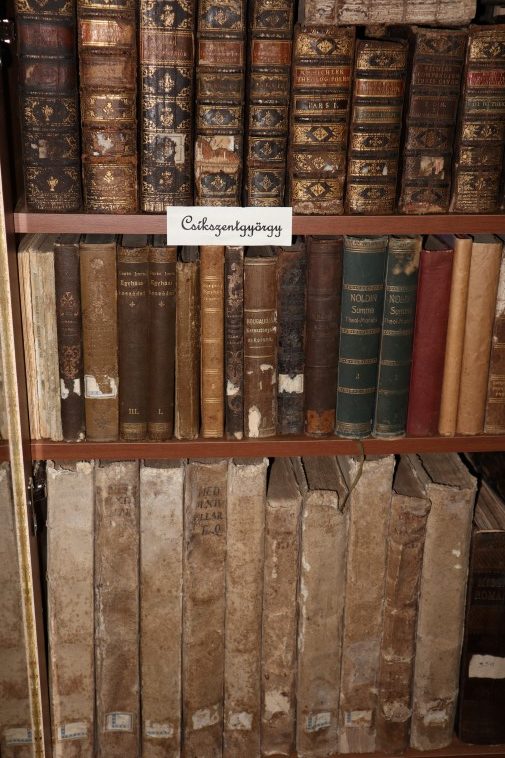 The book was procured by a priest of the parish in the 18th century, who was later suspended for performing exorcism

Old book-specialist Rita Bernád had also pointed out, that there were previous attempts to maintain the good state of the incunabulum; restorers observed some gluing on it, which had probably been carried out in the 18th century, with the occasion of its re-binding. The archivist had pointed out, that restorers will unfold the cover of the book as in some cases the print matter fragments in the inside might be even more valuable than the document itself.

The restorer working on the precious incunabulum, Árpád Benedek explained the phases of the restoration. As he elaborated, at first they review the book page by page. Then the so called dry cleaning follows, for which a special brush is used. If necessary, the book is gently vacuumed as well, rubbed out, or in some cases a specific chemical treatment is applied. This volume of the Bible is in a good shape though, it’s not molded, so no chemicals have to be used. The leather cover will be removed and restorers will try to separate the paper leafs glued together inside it. The fragments can be replaced by historically faithful replicas made out of Japanese handmade paper, or restorers might mix again the existing paper material and recast it.

Incunabulums are the most expensive documents in the world – emphasized Erzsébet Muckenhaupt, the old book-specialist who had authenticated this Old Testament as such. An incunabulum is a book or even a one-paged edition, which was printed in between 1450 (the invention of printing technique in Europe) and the end of the year 1500.

15th century printers used the most characteristic font types of the medieval codices (gothic, antique) and medieval abbreviations, ensuring this way, that the lines would have the same length. An incunabulum did not have a title page; the name of the printer, the date of printing usually appeared at the end of the volume, in the colophone. Still, about a third of these volumes did not have a colophone, just like the Csíkszentgyörgy Testament. For authentication the specialist had used the scientific method worked out by Konrad Haebler, who had put together a large repertoire for the most diversely cut gothic letter, the »M«, and identified about 101 basic types of it.

The value of this recently discovered Old Testament is increased by the fact, that it was made in an important European printing center in Nürnberg, in the press of Anton Koberger, one of the most productive German printers and book vendors of the 15th century. He had an extended network of commercial relations that is how his books reached Transylvania as well. The scripture explanations in the document are written by authors named Guillelmus Brito, Matthia Döring, Paulus Burgensis and Nicolaus de Lyra.

Koberger had printed many examples of the 1497 Bible this Old Testament belongs to; most of them are kept in German speaking areas. The second volume of this Bible is in the Academic Library of Kolozsvár (Cluj-Napoca), the fourth in the collection of the Csíki Székely Museum, in between the library materials of the Franciscan order of Csíksomlyó. The third volume they had recently found is the only one they know about though in the country, and the first one had not been found yet at all in Romania.

The book’s 1721-binding is valuable as well; it preserves fragments of printed material, as the book-binder used the printing muster pages glued together to brace the cover boards. The 15th century Old Testament can be studied in digitized form on the web site of the Csíkszereda archives.

Title image: The 15th century incunabulum has many values, some of them still have to be studied