An early 17th century crypt with valuable archeological finds has been unearthed recently in the Reformed Church in the village of Gyulakuta (Fântânele, Gielekonten), the news portal of the Transylvanian Reformed Diocese announced. As it turned out, the underground burial chamber found under the church’s sanctuary is the family crypt of a Transylvanian nobleman, Gáspár János Szövérdi, who was a confidante and ambassador of the great Transylvanian Prince Gabriel Bethlen. Szövérdi was also a wealthy 17th century landowner in the village of Gyulakuta, located in Maros (Mureş) County, Transylvania.

The medieval church (which dates back to the 14th and 15th centuries) is undergoing restoration. Archeologists began explorations in early February. Szilárd Gál, the leader of the research team and an archaeologist from the Maros County Museum, told the Hungarian News Agency MTI that the family crypt was discovered at the end of last month. The vaulted burial chamber has 70-centimeter-thick, massive brick walls, is 4.3 meters long and 2.7 meters wide, and has a height of 2.3 meters.

The crypt had not been opened since the early 17th century, but unfortunately, it was flooded several times in the past, when the river Küküllő and the nearby creeks overflowed. Thus, the remains of two adult men, three adult women (one older, two younger) and five children have been dug out of a layer of mud in the crypt that was 60 to 70 centimeters thick. As the engraved golden wedding ring of Zsófia Bethlen, the second wife of Gáspár János Szövérdi, was also found among the remains, and as Szövérdi was an important patron of the church, archaeologists safely concluded that it was his family crypt. The name of the pair appears on the beautifully painted ceiling of the church, as they supported the cost of building it in 1625.

Szövérdi inititally established his wealth by marrying his first wife, the widow of János Lázár of Gyulakuta, Krisztina Safarith. Szövérdi built a successful political carrier: He was present at all important political events in Transylvania and became a confidant of Prince Gabriel Bethlen, who appointed him ambassador to Constantinople. Szövérdi died in 1625 while returning home from one of his trips. 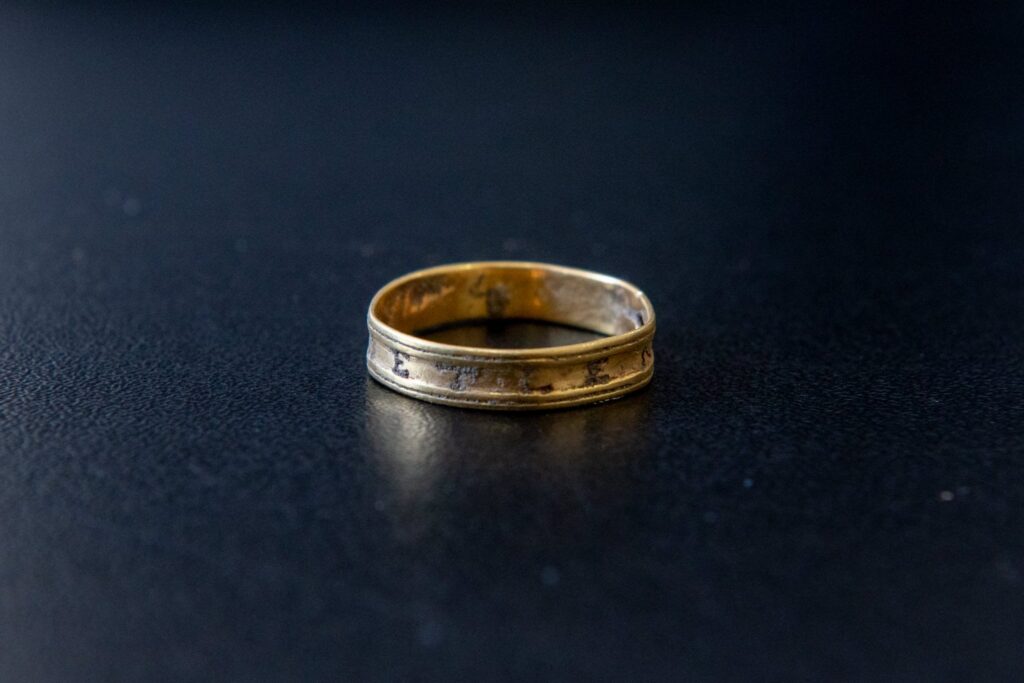 The wedding ring of Zsófia Bethlen. Her name is engraved on the outside, while on the inside, there is a typical symbol of Christianity, a fish.

The floods caused a lot of damage in the burial chamber, and everything inside was covered by the layer of mud. Besides the human remains, researchers have found several structural parts of wooden coffins, some decorated with silver nails and knobs, three additional golden rings (one with a family emblem, two with turquoise stones), and a golden clothing adornment, which was probably made in the Turkish Empire.

“There are crypts under many medieval and early modern churches all over Transylvania, but most of them were robbed centuries ago. This is why the current excavation in Gyulakuta is so special and significant,” archaeologist Szilárd Gál pointed out. In the past century, there has been only one similar finding: As we have also reported, in September 2019, an intact 17th century crypt with several smaller chambers was unearthed in the city of Bánffyhunyad (Huedin).

“Transylvanian crypts usually have just a small opening, but this crypt had an impressive, arched doorway. The entrance was blocked by four huge stones cemented together with lime mortar. It was really exciting to find this,” the archaeologist noted.

In the first part of February, previous to the discovery of the Szövérdi crypt, a team of archeologists led by Keve László found the remains of an early medieval church as well, which presumably was partly made out of wood. Researchers also discovered graves from the period of the Hungarian Conquest; inside these, 10–11th century hair rings and also a piece of fabric woven with silver thread were discovered. During the excavation, they came across the east wall of the Szövérdi crypt, and some remains of the church’s Gothic-style windows. Restorer Lórand Kiss has conducted a thorough research both inside and outside of the church and found some interesting medieval fresco fragments as well.

The last large-scale renovations were carried out on the Reformed Church in Gyulakuta in 1860.

The congregation had initially just wanted to fix the church’s external and internal drainage, but as it soon turned out, many other reparations had to be carried out. The parish applied for funding (EUR 60,000) via the Transylvanian Reformed Diocese from the Hungarian Government; as their tender was successful, they were able to start the renovations. Last December, the roof of the church was replaced, and after the archeological site inside the church is closed off, a new brick flooring will be laid, the reformatus.ro news portal wrote.

In the near future, the heating of the church will have to be modernized. The murals and the cassette ceiling are best preserved if there is a constant temperature of 10–12 degrees Celsius in the church. The painted 17th century cassettes are the work of a famous master from Mezőbánd, János Egerházi (János Képíró). These are also awaiting restoration, as their condition is slowly deteriorating. In addition, organ repairs are underway, which will cost a total of RON 47,000 out of which RON 28,000 were provided by the Romanian State Secretariat for Religion.

The parish supported the costs of all the planning, while the archaeological research was paid for from donations. The restoration of the benches is estimated at a further RON 7,000 while whitewashing will cost an additional RON 25,000. Yet another RON 25,000 will go to the workers and archaeologists. The names of all those who donate to the church will be noted in a special register as well.

Title image: The massive crypt had not been touched by anyone for centuries.