At first glance, it doesn’t make sense why some ideas preoccupy you, but when you look back after a while, every piece of the puzzle is in place, and you get the full picture. This was the case with Attila Szabó-Bilibók, an entrepreneur from Székelykeresztúr/Cristuru Secuiesc, who at first didn’t understand why he kept thinking about buying a certain piece of land in Kisgalambfalva/Porumbenii Mici, Hargita/Harghita County.

The idea of an agritourism inn is born

As the years passed, Attila Szabó-Bilibók began to understand why he had felt such an urge to pursue his current venture: He and that piece of land were connected, destined to build a future together in the form of an agritourism inn and aquaponics farm where visitors can reconnect with the natural environment and recharge their batteries by disconnecting from technology.

“New ideas and new projects somehow find me, and that is how I started my aquaponics project,” Attila Szabó-Bilibók tells TransylvaniaNOW, laughing. He and his wife were living in Nagyvárad, a city close to the border with Hungary, running a variety of businesses and enjoying their life there. However, Attila always dreamed of returning to his birthplace, Székelykeresztúr. That opportunity arose through a rural development grant, which funded the building of new, agritourism hotels.

Without land, that opportunity would have been missed, so he quickly started hunting for an area where he could later build an inn. His relatives recommended a beautiful piece of land, but Attila ignored them and kept on searching and paying for ads. The first call he received after placing the ad (out of the many received) was from the owner of the aforementioned piece of land (which Attila now owns); the owner had no idea that his land had previously been strongly recommended by others close to Attila. After visiting the site, Attila and his wife quickly fell in love with the place and signed the contract.

“This is a very special place. It has a special vibe, a deep calm that makes our visitors

For example, before coming here, our latest guest suffered from sleep disturbances but has slept like a child since his first night here. He left happy and recharged,” Szabó-Bilibók tells TransylvaniaNOW.

As the building of the agritourism hotel progressed, the Szabó-Bilibók family spent more and more time on-site at Kisgalambfalva and, despite originally having other plans, finally decided to leave their big city life behind and move here permanently. That was in 2015, the year Attila started to dive into something new: aquaponics farming.

“We didn’t invent anything new but rather followed the path of a friend of mine based in Debrecen (Hungary) and built our own aquaponics farming system with the advantage of following his advice and learning from his mistakes,” Szabó-Bilibók said.

Aquaponics is a food production system that combines aquaculture (in this case, raising fish in tanks) and hydroponics, the latter meaning the cultivation of plants in water. The nutrient-rich aquaculture water is pumped into the hydroponic plant holding the plants. Their roots are immersed in the nutrient-rich water, which enables the plants to filter out the ammonia, which is toxic to the fish; the cleared and oxygenated water is then recycled into the aquaculture tank. This is an endless cycle, and according to Szabó-Bilibók, the investment is minor compared to the final result — fresh plants throughout the year. Aquaponic farming requires a specially arranged place with a certain ambient temperature and humidity. 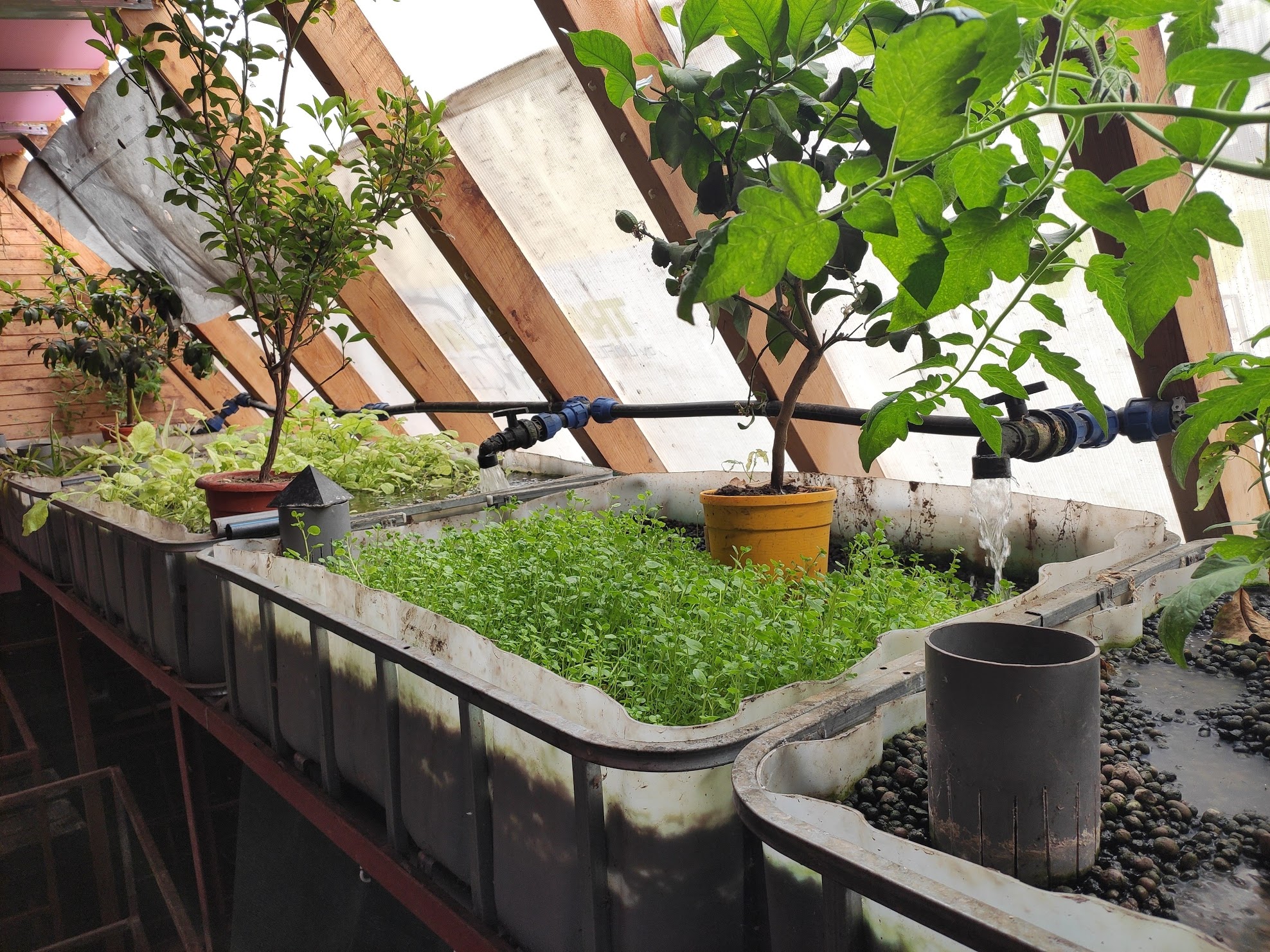 The aquaponics farming system is also suitable for growing wheatgrass.

Attila Szabó-Bilibók is the first we know of to set up an aquaponics system in Transylvania, as opposed to the traditional method of growing crops. “They don’t exclude each other,” Szabó-Bilibók emphasizes.

“We believe that you limit your choices by the ‘either-or’ principle, so we follow the ‘too’ principle,

because the traditional way is nicely complemented by the aquaponics system. The latter occupies a small space, so every household can set one up, and its major advantage is that you can collect fresh crops all year round. It’s a great place to grow herbs, so you have fresh spices on hand at any time of the year. Another advantage of aquaponics compared to the traditional method is that it creates the perfect environment for planting plants,” Szabó-Bilibók explains.

The aquaponics system requires an investment only at the beginning, and it is scalable, he says. After everything is set up for the personal needs of a family, it becomes self-sustaining: you feed the fish and plant the plants. That’s all, according to Attila.

However, despite its advantages, aquaponics is not so popular in Transylvania or in the rest of Romania. During the open days at the aquaponics farm in Kisgalambfalva, Bilibók patiently explains how it works and answers visitors’ questions, going into details. In the past several years, he has set up his own farm and started spreading the knowledge. He has seen great interest, but none of his visitors have asked for help to build a new aquaponics farming system in Transylvania.

From big city life to zero waste in the rural environment

As they left their big-city life behind and got closer to nature and the environment, they realized how much trash one family produces throughout the year. To reduce it, they have “redesigned” their habits. The transformation was a natural process, not a purposeful one, though. It strongly relates to the family’s strengthening connection with nature and the environment.

Healthy life begins when you leave all the unnecessary things behind and start focusing only on what truly matters. That’s what visitors to the agritourism inn in Kisgalambfalva experience: a deep connection with the environment it is set in, with habits shaped to live a sustainable life.