Father Monsignor Gergely Kovács was ordained as Archbishop and will be serving at the main archdiocese of the Transylvanian Catholic Church, the Archdiocese of Gyulafehérvár/Alba Iulia, on Saturday, February 22, 2020. At the festive Church ceremony held at the Cathedral of St Michael Gyulafehérvár/Alba Iulia, 42 bishops, 400 priests and thousands of pilgrims were present.

Cardinal Gianfranco Ravasi, who led the church ceremony and is President of the Pontifical Council for Culture, emphasized in his speech – also translated into Hungarian – that Mons. Kovács experienced the universality of the Church during his more than two decades of service in Rome and also saw the necessity of integration with the new, digital culture. The Cardinal noted as well that upon his return to his homeland, Mons. Kovács brings back a global vision and open character, adding that as a child born of a mixed-religion marriage, he also brings a personal life story impregnated with ecumenism. Mons. Kovács was consecrated by Cardinal Ravasi as well as Archbishop Emeritus of Gyulafehérvár György-Miklós Jakubinyi and Archbishop Miguel Maury Buendía, the Apostolic Nuncio from Bucharest.

“We must walk together, preserving our culture and identifying but paying respect to difference, to the other person. We can work in a way pleasing to God only while respecting, appreciating and helping each other. Let us walk together!” the Archbishop said. Mons. Kovács is the 84th Bishop of the Archdiocese of Gyulafehérvár/Alba Iulia.

On December 24, 2019, the Holy Father accepted the resignation of Archbishop György-Miklós Jakubinyi from the pastoral care of the Archdiocese of Alba Iulia. On the same day, the Pope appointed Father Mons. Gergely Kovács to the same position. Mons. Kovács is from the clergy of the Archdiocese of Alba Iulia and serves as office-head of the Pontifical Council for Culture.

He served as parish vicar in Marosvásárhely/Târgu Mureş from 1996 to 1997, when he entered into the service of the Holy See at the Pontifical Council for Culture, responsible for the German and Central-Eastern European areas; he has held the role of office-head for the same Pontifical Council since 2007. He also served as editor of the journal Cultura e Fede. On July 24, 2000, he was named Chaplain of His Holiness. 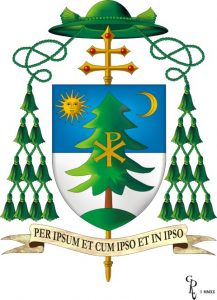 Interpretation of the ecclesiastical heraldry of Archbishop Gergely Kovács

The twenty green tassels and the double cross are characteristics of the archiepiscopal coat of arms. The five red precious stones adorning the golden cross are symbols of the five wounds of Jesus. The pine tree is a reference to the native land of the Archbishop and also a reminder of the heraldry of Bishop Áron Márton.

The Sun and the crescent Moon also have a complex meaning: In the coat of arms of Transylvania, the Sun and the Moon are symbols of the local Székely/Szekler nation. As Christian symbols, the rising Sun denotes Christ and the Moon signifies the heavenly Mother, Mary. Just as the Moon gets its light from the Sun, similarly, Mary receives light from her Son. Within the pine tree, there is a Christogram that represents Christ, carried in the hearts of the Székelys/Szeklers, who are mainly Catholic and rely on their faith in Jesus Christ.

The blue symbolizes the leaving behind of earthly goods and the ascension of the soul to God. The silver signifies the transparency (openness, communication and responsibility), truth and justice that are the basis of the ministry of the Archbishop.

The Cathedral of St. Michael of Gyulafehérvár/Alba Iulia

The seat of the Roman Catholic Archdiocese of Transylvania, located in Alba Julia, was founded by the Hungarian King Saint István around 1009 A.D. Saint Michael’s Cathedral is the only cathedral of the dioceses established by Saint István that is preserved in its original form.

This cathedral of the Transylvanian Catholic Church bears witness to a long history. Bishops, lay notables (Hunyadi János, Hunyadi László, Queen Izabella, Fr. György) and princes (János Zsigmond, Bocskai István, Bethlen Gábor, Rákóczy György I) are buried here. The cathedral is of immense cultural value, and the archdiocese is a significant seat for the consecration and ordination of priests as well as an important pilgrimage destination.

Farmers’ markets to be created for local growers in Szeklerland cities

Ludovic Orban: MPs should give up their special pensions