“There is no Planet B” say young environmentalists at Bucharest demonstration

Bucharesters will go out on the streets today, February 14, for a protest march against the city’s air quality as well as against the way authorities from City Hall, the Environmental Protection Agency and the Ministry of Environment manage the pollution endangering their lives.

The rally, named “Clean air, no intoxicated lungs,” was going to take place in front of City Hall on Regina Elisabeta Boulevard during Bucharest’s General Council meeting today, but the organizers couldn’t get the required permits due to another event taking place. City Hall representatives did not specify what the event was, and rally organizers say that their meeting was deliberately sabotaged by the authorities.

They did, however, obtain permission for a protest march towards the Ministry of Environment. Thus the route will be: Unirii Boulevard – Constitutiei Square – Ministry of Environment. This is shown on the website for Fridays for Future Romania, an activist movement inspired by 16-year-old activist Greta Thunberg, who, in August 2018, started a one-person demonstration outside the Swedish Parliament, calling for change. Greta has motivated students around the world who have joined her cause and started holding protests every Friday.

The protesters today are taking to the streets because of the alarming increase in air pollution in Bucharest. The city ranks 13th among the 14 capital cities analyzed, as shown in the latest report by Greenpeace relating to sustainable mobility and the quality of air.

Although the Ministry of Environment has worked with the World Bank to come up with low-carbon development strategies, actual enforcement of these has been minimal. As a result of this, Romania recorded a 6.8 percent increase in carbon emissions from 2016 to 2017, the seventh-highest in the EU. The Romanian cities of Iasi, Cluj-Napoca, Brasov and Bucharest are among the most polluted cities in the country.

The Ombudsman announced in a press release that he has opened a case on the matter and is demanding information from Bucharest City Hall, the National Agency for Environment Protection and the Ministry of Environment. Citizens in Romania have signed 54 different petitions addressing the level of pollution in Bucharest and insisting that the maximum allowed concentration of air pollutants registered on January 4, 2020, never occurs again. 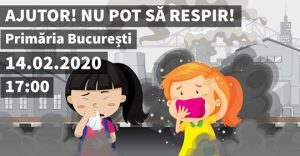 Greenpeace Romania states that the measures taken by local authorities in Bucharest are inefficient and do not bring any actual improvement in air quality. “Residents put their health in danger on a daily basis,” representatives of the organization stated.

Romania was sued by the European Commission at the European Court of Justice because authorities did not take the necessary measures to ensure that people living in Bucharest no longer inhale toxic air.

On the page of the European Environment Agency,  the map of the air quality of European States is full of turquoise, green, orange, brown, violet or red dots, marking different levels of pollution. One single country of the European Union stands out on this map for having exclusively black dots, which means absolutely no data has been recorded. That country is Romania.