Published in Hungarian between 1934 and 1940, The Transylvanian Trilogy by Miklós Bánffy is considered today as one of the reference books of the 20th century.

Starting in 1934, Count Miklós Bánffy’s strapping Transylvanian Trilogy, a masterpiece of 1,500 pages was published one book at a time in Hungary, with great success. But by the time the third and last book came out in 1940, World War II had broken out, and it couldn’t have been easy to generate interest in fiction set during the run-up to the earlier world war. A few years later, with Hungary under communist rule, few writers were likelier to be ignored than a nobleman from a family of soldier-diplomats whose income had derived from vast forests in Transylvania, a region that had been something of a poor relation within Hungary (not unlike Hungary itself in the Austro-Hungarian Empire) and now found itself subsumed into Romania.

But thanks to the labors of two English translators, one of whom is Bánffy’s daughter, (Patrick Thursfield and Katalin Bánffy-Jelen ) The Transylvania Trilogy has overcome barriers of class, language and geopolitical complexity to take its belated place among the great works of 20th-century literature. In some ways, it’s an old-fashioned novel, with an omniscient narrator and few traces of the modernism spreading through America and Europe — and especially Vienna, the Austro-Hungarian imperial capital — at the time it was being written.

On the other hand, Bánffy took advantage of the new freedom allowed in the portrayal of sex and seems to have been well-versed in contemporary psychology. His chief asset, though, is a range that lets him depict nature in luscious detail, evoke a grand party; do justice to parliamentary maneuvering, while joggling multiple plot lines and dozens of characters. Bánffy’s hero is Count Bálint Abády, a wealthy bachelor but not a playboy. Indeed, he embraces the doctrine of noblesse oblige.

When a profligate cousin scoffs at the family’s “pride of race,” Bálint gives him a thoughtful reply: “Nobody is selfless. Nobody ever was. But [the Hungarian nobility has] learned to recognize what is for the public good and to fit it to their own advantage, too. This instinct has been bred into us. . . . It’s not by chance that until now almost every great national leader has sprung from this rank of society, for leaders must know how to lead. Leadership is our responsibility and we should not lightly avoid it until such time as all our people develop some sense of social responsibility themselves.”

Bálint doesn’t just mouth these precepts: he lives by them. With some reluctance (he believes he has no gift for politics), he runs for and wins a seat in parliament. But most of his civic energy goes into setting up cooperative forests on which peasants can work to overcome their atomistic poverty. His altruism infuriates vested interests, including regional foresters who exploited the old arrangements.The trilogy’s most enthralling plot line, however, centers on a love affair. Bálint is deeply in love with Adrienne Milóth, who unfortunately is already married. She loves him back, but formidable obstacles lie ahead. 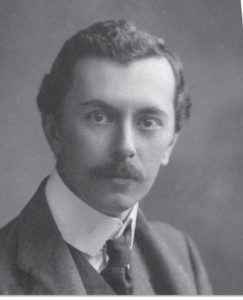 Bánffy Castle of Bonchida-Bonțida, location for many of the scenes of the novel was ransacked by Russian soldiers at the end of World War II, and Miklós Bánffy “died impoverished and forgotten in 1950. Now, more than 60 years later, his great novel has been rescued from oblivion, ready to be enjoyed by anyone hungry for brilliant and impassionate storytelling on a grand scale.

The Bánffy Castle in Bonchida

The partially renovated castle – now the location of Romania’s most successful music festival with a crowd of more than 200,000, Electric Castle – is handled and maintained by the Transylvania Trust Foundation and lives flourishing times again. Great attention is drawn now to the building thanks to the events organized there and according to Csilla Hegedüs, representative of the Transylvania Trust Foundation: “ former owner of the castle Count Miklós Bánffy would not mind this hype at all, as besides being a brilliant writer and politician, he was one of the greatest party-animals of the 20th century and his castle was always open to fun and high-class entertainment.”

Says Marius Tabacu, translator of The Transylvanian Trilogy: “it is great joy for me, that the trilogy is finally out in Romanian”. He added: “the translation of the novel published by the Romanian Cultural Institute was a great challenge to me, because Count Bánffy knew nature at its depth, he knew the names of all grass types and it was hard to find the matching words to all plants”. According to Tabacu, Bánffy created a fictional, spiritual Transylvania in his book. He hopes that the book will have a welcome reception by the Romanian community because it is a great gift to them from the Hungarian community. 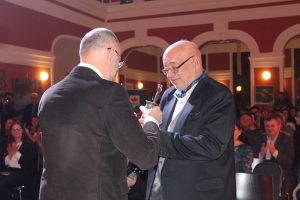 Marius Tabacu receiving the award for the translation from RMDSZ

The director of the Hungarian Cultural Institute in Bucharest, that contributed to the publishing of the book, András László Kósa said that the launch of the Romanian edition of the novel is really important because it shows the actual ethnic coexistence, that characterizes Transylvania and can bring the Hungarian aristocratic world of Transylvania closer to the Romanian community.

The novel was published in the last two decades in English, French, Spanish, German, Italian and Dutch and was welcomed with great enthusiasm. The Romanian edition was translated by Marius Tabacu with a foreword by Marta Petreu, rounded out by an introductory study and glossary made by Lucian Nastasă‑Kovács.