Pope Francis will come to Csíksomlyó/Șumuleu Ciuc on the 1st of June with a special gift – the one given for places of worship. The gift (a golden rose) will be delivered at the end of the Mass pontificated by the Pope and for this reason the statue of Our Lady of Csíksomlyó will be transported to the mountain saddle. The offering of this gift – sign of Pope Francis’ respect for the Virgin Mary of Csíksomlyó is an outstanding gesture of acknowledgement of the statue and of the fate of the people of the region.

The rose to be given to Our Lady is made of silver, the stem and the coat of arms is glazed in 24 karat gold. The base is pink marble, on which a silvery vase stands with the pontifical coat of arms, in which two naturalistic roses stand, their leaves are made of silver.

This is not something exceptional, the practice is the same at other places of worship as well, mentioned Márta Bodó press organizer of the papal visit: the holy statues are taken to the Pope, so that he is able to offer the gift to them. There is a practice at some shrines also, that processions are held at certain festive occasions with the statue or its scale model. This will be the first golden rose offered on the territory of the Carpathian basin. 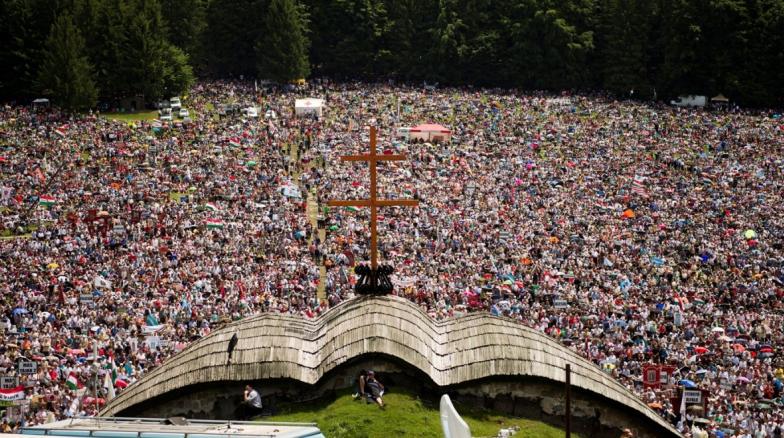 The Pentecost Pilgrimage of Csíksomlyó is the largest religious and ritual event of Catholics in the Carpathian Basin, an event in the area around the Franciscan monastic settlement of Somlyó that has been reference in ecclesiastic documents and oral tradition going back to 1442.

The central element of Pentecost Pilgrimage of Csíksomlyó, the largest religious and ritual event of Catholics in the Carpathian Basin, – taking place this year on the 8th of June – is the veneration of the Virgin Mary, when hundreds of thousands of participants express their gratitude with donations and commemorative plates, showing their devotion through prayers and religious folk practices. The event in the area around the Franciscan monastic settlement of Somlyó that has been reference in ecclesiastic documents and oral tradition going back to 1442.

The statue of Our Lady was a feature in the church from that time, although the origins of the statue are unclear. Regardless, many came to pray before the statue and reports of miracles due to Our Lady’s intercession from the 16th Century onward.

In the ensuing centuries the shrine itself was attacked and burnt to the ground on several occasions, yet the statue miraculously survived. There is also a report of one enemy soldier who attempted to pierce the statue with his lance but was not able to do so. The shrine draws thousands of faithful each year, not only from Romania but from many other countries as well. The statue is on display above the High Altar in the church, which itself is one of the most beautiful in Europe.