The ongoing story of an aristocratic city home: the Jósika-palace in Kolozsvár

On the western side of the central square of Kolozsvár (Klausenburg, Cluj-Napoca) stands an imposing palace with a classicistic façade. Its historical name is the Jósika-palace, but the citizens of Kolozsvár commonly refer to it as “the house with stumps”, as the main balcony is supported by four monumental Tuscan columns. The building complex of the palace stands on a parcel with a plan of a prolonged rectangle form, stretching between the west side of the Central Square and the Kötő (Episcop Ioan Bob) street. There is even a very lively urban legend with no real explanation that passes on from one student generation to another: one should never walk under the columns of the balcony of the “house with stumps”, as it brings bad luck, especially if one faces an exam.

The palace is composed of the representative building block with a U-shaped plan, and a similar western block that connects with the other on the southern side, through a continuous wing. Throughout the 16-17th centuries, in the place of the main wing of the palace stood two houses with medieval and renaissance architectural elements. These houses had several owners; most of them were burghers of Kolozsvár. A famous 16th century owner of one of the houses was the diplomat and traveler István Kakas, the son of András Kakas, a nobleman from Hungary, who had fled from the Turkish peril, and moved to Kolozsvár in the second half of the 16th century. 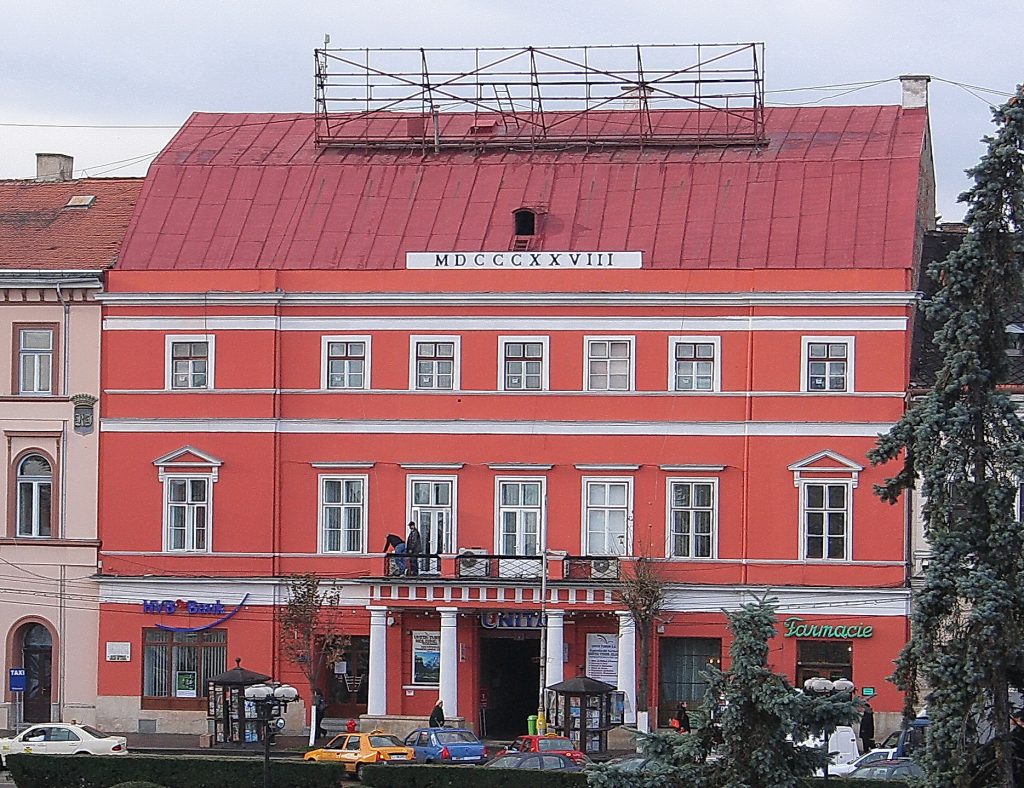 Members of the aristocracy were not allowed to purchase real estate in Kolozsvár until the 1660’s. After Nagyvárad (Großwardein, Oradea) had fallen to the Turkish invasion, and Kolozsvár had lost its former privileges the rules concerning the aristocracy could not be upheld either.

In 1790 the renowned, literate governor with a luxurious lifestyle, who had commissioned the trend-setting Bánffy-palace, György Bánffy moved the seat of the Government, the so called Gubernium from Nagyszeben (Hermannstadt, Sibiu) to Kolozsvár. Due to this move, the social and political life of the city began to thrive, Kolozsvár became the political center of Transylvania, and the highest ranking families started to build  their city palaces one after another. This was actually necessary, as several members of the aristocracy held public offices and had to spend at least part of the year in Kolozsvár. The palaces built in this era actually define the whole image of the inner city ever since.

In the 18th century one of the houses standing on the lots of today’s Jósika-palace was bought by the Csáky, the other one by the Jósika family. The parcel as we know it took shape in 1802, when two young heirs of each family, countess Rozália Csáky, and baron János Jósika married. They had begun reconstruction shortly after their wedding; initially they had commissioned a baroque palace with one floor, and the façade was probably crowned by a triangular frontispiece. The second floor of the main wing was built in 1828, as it is attested by the date written in roman numbers on the façade: MDCCCXXVIII. Above the inscription of the year of construction, the façade was adorned by the blazon of the Jósika family with two huge lions, carved out of stone. The coat of arms was in place until the 1960’s, when it was knocked off its place and destroyed – at least everyone thought so…

The baron János Jósika, who was also the president of the Transylvanian Government from 1822, lived with his wife and family in the palace until his death in 1843. The city home was inherited by his second son, Lajos Jósika, who had held important public positions as well, being the advisor of the Government and supremus comes of the county, the so called főispán, or county governor in modern terms. He was the one to build the second floor of the courtyard wing in 1864–1865. He leased parts of the palace to the owners of small enterprises: according to the first photos of the central square, made by Ferenc Veress in 1859, on the south side of the main gate there were two porcelain shops, on the north side of it two stationary stores. 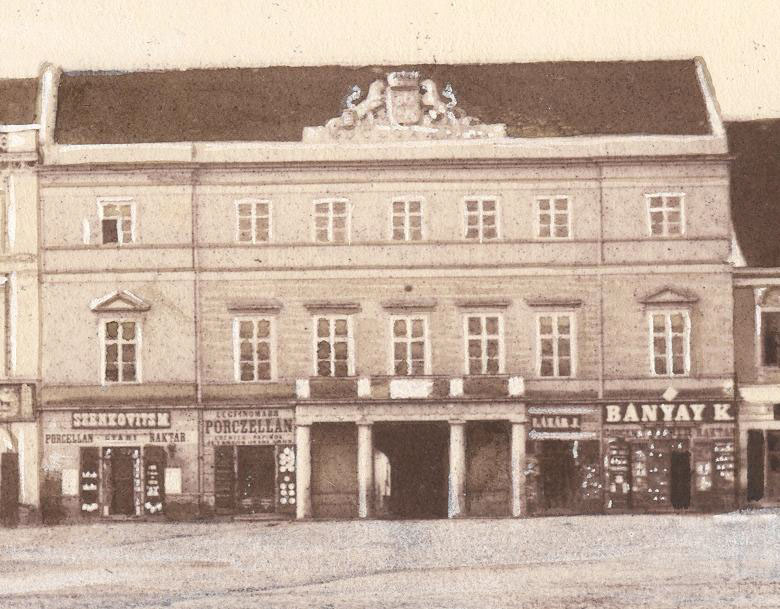 The main façade of the palace in 1859, with the coat of arms still in its place

From the 1860’s the chambers on the first floor of the main wing were rented out to the casino of the nobles, which organized several balls there. In 1890 the first floor of palace was rented out to the Royal Court of Justice, which functioned there until 1902, when the Palace of Justice was finished in the former Bocskai (Avram Iancu) square. In the first decades of the 20th century, as proven by the postcards of that period, the well-known pharmacy of Frigyes Burger functioned in the chambers on the north side of the main entrance. 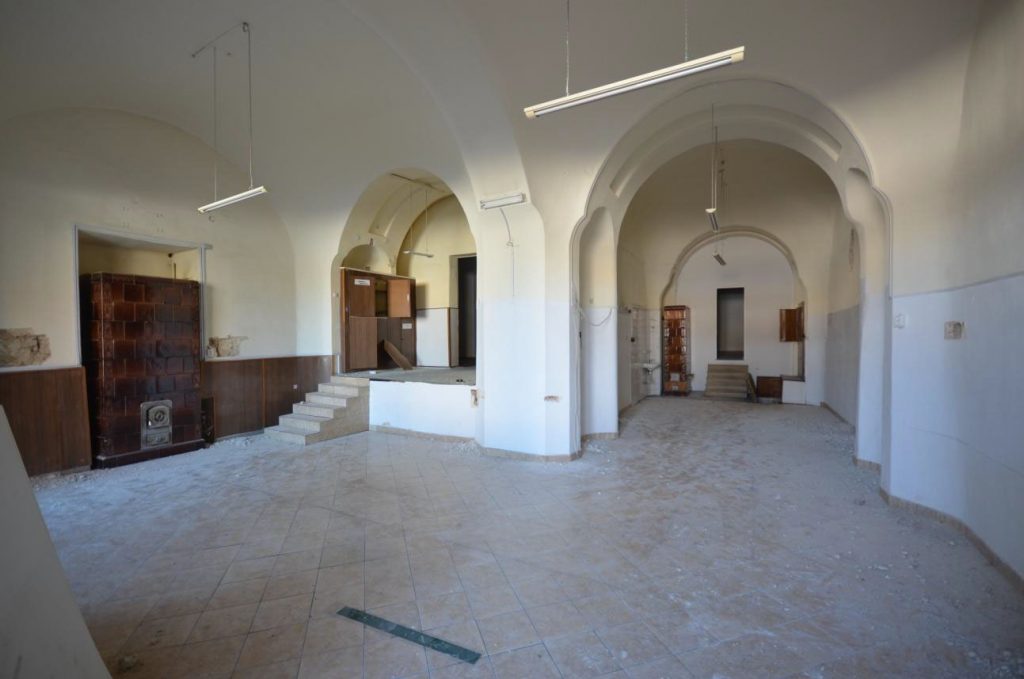 Function hall with two naves on the ground floor of the main wing Photo: Zsolt Kovács

The heir of Lajos Jósika was his son, Sámuel Jósika. Next in line was Sámuel’s daughter, Paula Jósika, the wife of György Bethlen. She had left the palace in her last will to her niece, Mária Bánffy. The palace was nationalized in 1949, and a state company established its offices in the main wing. For some time the library of the medical faculty functioned there as well.

After the regime change, the descendants of Mária Bánffy asked for restitution. The long years of the restitution lawsuit ended in 2013, and the lawful heirs could take over the management of their property in 2017.

Shortly after the formal restitution, one of the heirs, Béla Bánffy, the owner of a touristic agency well-known in the city, who is entrusted by the family to manage the palace’s affairs, was kind to give me a tour of the palace. He also pointed out that the family is determined to maintain, restore and to give sustainable functions to their historical inheritance. He was the one to make a startling and exciting discovery – not just to the heirs, but the whole community: when he walked the palace from top to bottom, in the darkness of the attic he found the Jósika-lions of the family blazon, torn to several pieces. Fortunately, probably, those who took it down were too lazy to carry the rather huge stone pieces down, so they just pulled them to the attic and left them lying there for six decades.

The Bánffy family commissioned a stone-restorer, Zoltán Kiss and his team to restore the beautiful coat of arms. They searched for every little piece, and put them together again, like a huge stone puzzle… Unfortunately, some parts are missing, but even so the restorer managed to “resurrect” the imposing Jósika-lions, and was able to show the essence and main characteristics of the original work. The blazon will remain in the inside of the palace, the owners will find an appropriate place to display it, and they might even create a replica for the façade to be a memento of the family who had built the palace that is part of the history of Kolozsvár and its community.

The Jósika palace is actually an encouraging example, that there is hope for restituted historical buildings, as there are owners who can build a future based on the values of the past.

Title image: The coat of arms of the Jósika family was “resurrected from the dust” by a team of restorers

Revival of an architectural jewel: residence of the Nagyvárad bishop