Testing capacity can’t keep up with the spread of virus

The number of new coronavirus cases registered in a day doubled or even tripled for the month of October in several countries, including Romania. However, while most countries managed to expand their testing system as the numbers grew, Romania failed to do the same, Romanian news portal ziare.com reports. The portal tried to analyze the evolution of Romania’s coronavirus testing capacity during the most worrying month since the beginning of the pandemic and compare it to the testing systems of other European countries.

As ziare.com points out, some countries like Belgium or the Czech Republic, which have a population smaller than Romania’s, saw an exponential increase in coronavirus cases and consequently doubled or even tripled the number of tests conducted in a single day. Because of this, the news portal wanted to take a closer look at the testing systems used by these countries to see how they handled the fast spread of the virus. The site included in the analysis Romania, Belgium, the Czech Republic, Greece, Portugal and Sweden and used the data of ourworldindata.org for the daily testing rates, the population figures, and the evolution of the pandemic.

In Romania, with a population of 19,237,691, the latest data on testing capacity was published on October 29. On October 1, the country had 2,086 new cases in a day, but this figure tripled over the month, reaching 6,481 at the end of October. However, between October 1 and 29, the testing capacity registered a slower increase compared to the quickening pace of the spread: On October 1, the country performed 1.06 tests for every 1,000 people, while on October 29, this figure stood at 1.55 per 1,000 citizens.

Romania just faced another negative record for the number of new coronavirus cases registered in a single day: From Monday to Tuesday, 7,733 new infections were reported, bringing the total number of infections to 258,437. The country has conducted 3,305,309 tests since the beginning of the pandemic; 30,336 were performed in the last 24 hours. According to the latest report of the Group for Strategic Communication, 181,175 coronavirus patients have been declared cured.

The testing capacity of other European countries

The latest report on the testing capacity of Belgium and the Czech Republic was published on October 28.

Belgium, with its population of 11,589,623, had 1,337 new cases registered on October 1. This number grew significantly over the month, reaching 13,571 new cases on October 28. As the ten-fold increase in coronavirus cases was registered, the country doubled its testing capacity, increasing from 3.16 tests per 1,000 inhabitants on October 1 to 5.49 test per 1,000 citizens on October 28.

The Czech Republic, with 10,708,981 citizens, had many more cases at the beginning of October, and the number of infected people then tripled over the month. The country registered 3,484 new coronavirus cases on October 1, which grew to 12,980 registered on October 28. At the same time, the country’s testing capacity also increased: At the end of the month, it conducted twice as many tests as at the beginning of October, with the daily test rate increasing from 1.66 to 3.63 tests per 1,000 citizens. The highest rate was registered on October 27, when 3.73 tests were performed for every 1,000 people. 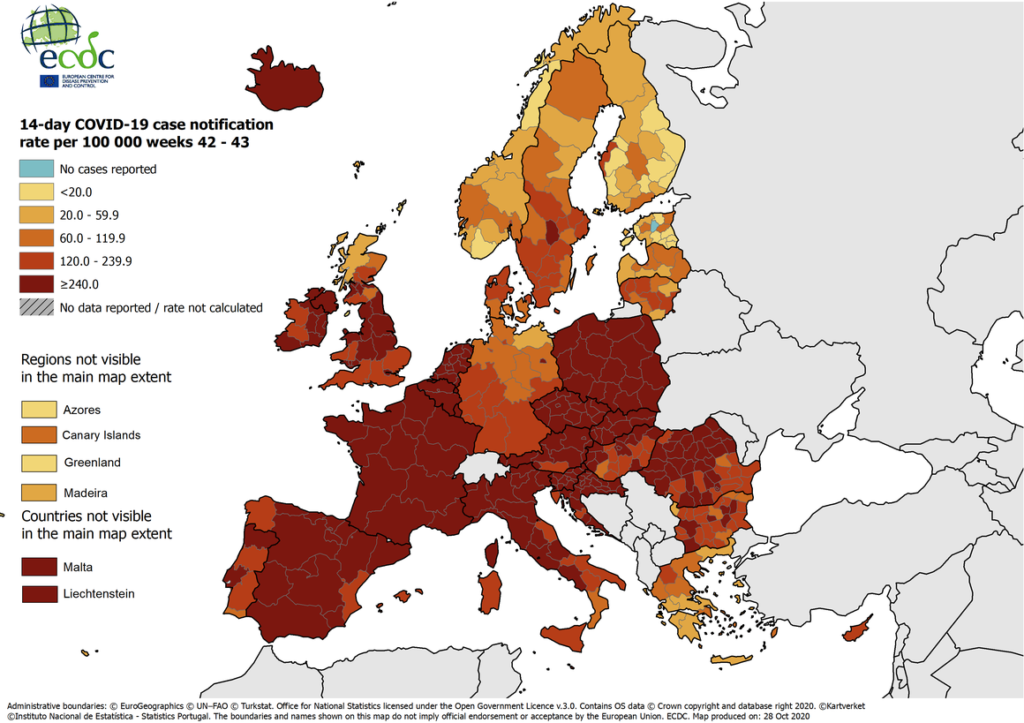 Title image: While the number of new cases registered in a day tripled in October, the Romanian daily test rate grew from 1.06 tests for every 1,000 people to 1.55. Photo: DigiFM