Temesvár Dome to reopen this autumn

After two years of restoration, the specialists working to renovate the 18th-century Roman Catholic Cathedral in Temesvár (Timişoara) are confident that the place of worship will reopen this autumn, the tion.ro news portal wrote. The Temesvár cathedral, commonly referred to as the Dome, is one of the most outstanding Baroque ecclesiastical monuments of the region. It is also a rare example where the original baroque furnishings have been almost completely preserved.

The restoration of the cathedral began in January 2019. According to the original plans, the project should have been finished by July this year, but the deadline had to be extended due to the scope of the work required. “The renovation process consists of two main parts: the structural rehabilitation of the cathedral and the restoration of the sculptural and painted elements,” conservation specialist Ioan Darida told tion.ro.

“All the artistic elements – paintings, wooden altars and sculptural decorations – in the cathedral are being cleaned one by one […] and restored. The team has been working continuously over the past two years, but the work is not yet finished, as there are a great number of details and it is very meticulous work,”

said Dana Postolache, expert art restorer. As she pointed out, the restoration of the stalls (the sitting places of ecclesiastical dignitaries) has been finished, the stained glass windows are almost ready, and most of the doors and the polychrome wood elements in the cathedral have been restored. Furthermore, almost two-thirds of the stucco elements have been refurbished and almost half of the work needed on the paintings is complete, Postolache said. 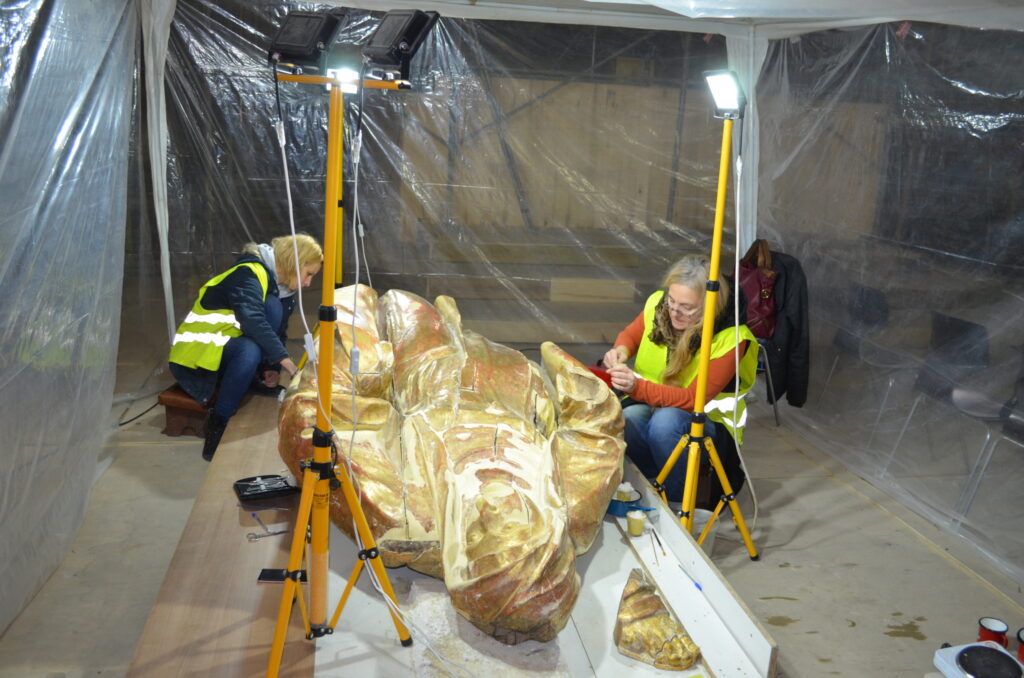 Both sculptural elements and paintings are to be cleaned and restored one by one. Source: gerhardus.ro

The restoration of the main altar painting depicting the patron saint of the Dome, Saint George with the dragon, and the refurbishing of the outside of the building has still not begun.

As it was announced in the first year of the restoration, the actual dome of the cathedral will have a different color: the yellow paint on its outer walls will be replaced by a hue of white, which – according to restorers – will further highlight the typical architectural elements of the Dome. Work on the outside will most likely begin in March or April.

“Our hope is that by the end of the year, most parts of the restoration project will be finalized. The works in the interior – which continue as scheduled – should be completed by the end of August. Thus, in September we can consecrate the renovated interior of the cathedral and we celebrate holy liturgies again,” reverend Nicola Laus, director of the diocesan chancellery, told tion.ro

The cost of the restoration project is some RON 28 million, the equivalent of EUR 4.4 million, and is being mostly financed by the Regional Operational Programme of the European Regional Development Fund, tion.ro wrote.

A short history of the Temesvár Dome

Just to summarize some of the cathedral’s historical milestones: In 1732, the Roman Catholic diocese of Csanád was relocated to Temesvár. That year, Bishop Adalbert von Falkenstein asked the imperial administration in Vienna to support the construction of an episcopal cathedral and residence. In the end, due to various political and financial reasons, only the dome was completed. The foundation stone of the cathedral was laid on August 6, 1736. However, due to a plague breaking out in 1738, the building was completed only in 1765, according to the plans of chief imperial architect Joseph Emmanuel Fischer von Erlach.

The cathedral was erected in the northern part of the old town of Temesvár, in a characteristic Baroque square (formerly Dome Square, today called Piaţa Unirii).

With a base plan of a patriarchal (three-bar) cross, the nave has a transept on its eastern end. The sanctuary is formed from three sides of an octagon, while on each side of the sanctuary is a square-shaped sacristy. The western façade, with two towers overlooking the square, shows characteristic features of Viennese Baroque church architecture. 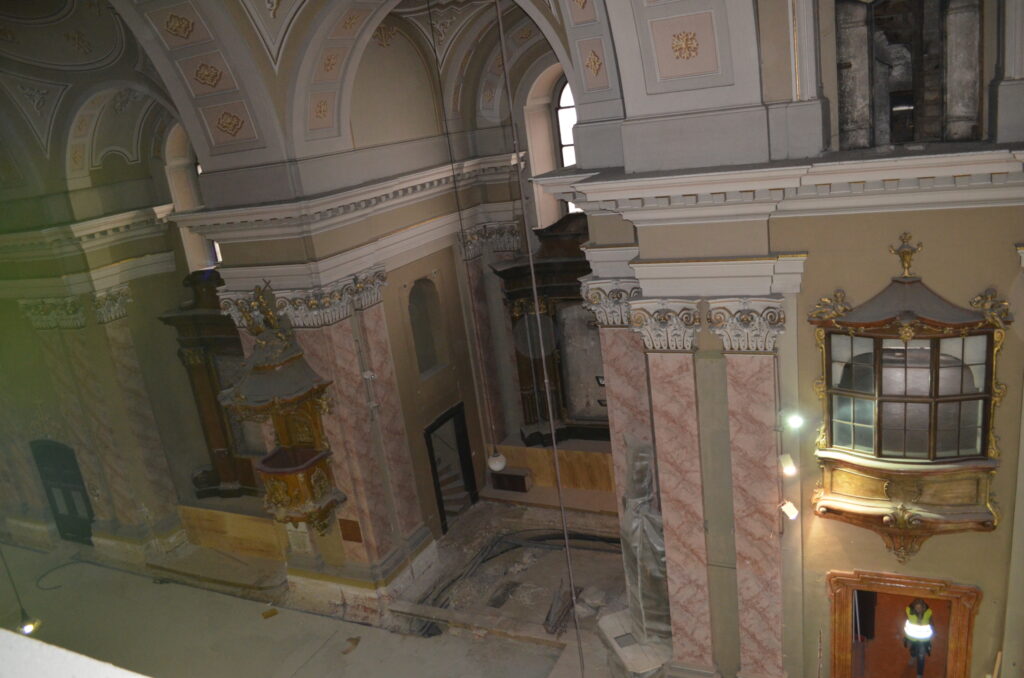 The baroque altars are also valuable elements of the Dome. The restoration had already begun when the photo was taken. Source: gerhardus.ro

The dome has mostly baroque furniture, with two neo-gothic side altars. On the main altarpiece, a painting (dated 1754) depicts Saint George’s fight with the dragon; it is the work of Michael Angelo (also Michelangelo) Unterberger, former dean of the Vienna Academy of Arts. The sculptural part of the altar, both the front piece and the statues of Saint Teresa and Saints Charles of Borromeo on the two sides were created by the Viennese master Iohann Joseph Resler.

The structures of the baroque side altars were constructed by the Temesvár masters Georg Wittmann and Franz Wagner.

The marble and wood were transported from Vienna. The side altars’ architecture closely follows the design of the main altar. The altar paintings were purchased in 1768 from Johann Nepomuk Schöpf.

The baroque side altar in the northern transept is dedicated to the Holy Cross, with the statues of Mary and Saint John the Evangelist on its sides. Opposite this, in the southern transept, there is an altar depicting the Last Supper, with statues of Hope and Faith on the sides.

In the nave, above one of the side altars, there is a painting depicting the death of Saint Joseph, with two adoring angels on each side. The small votive painting is of Mary with the Child Jesus. On the opposite side, there is an altar depicting the meeting of Mary and Elizabeth, with the statue of Zechariah and Elizabeth on each side. There is also a painting of Saint Anne teaching Mary to write. Another side altar in the nave is dedicated to Saint John of Nepomuk, with an adoring angel on each side, and an oval painting of Vir dolorum (“Man of Sorrows”). The side altar known as the Plague Altar depicts Saint Roch, who is presented praying for Mary’s intercession on behalf of the people tormented by the plague. The oval oil painting portrays Saint Anthony with the Child Jesus. The oak and linden pulpit, the stalls and oratory windows are also the work of Georg Wittmann and Franz Wagner.

According to the historical summary posted on the website of the Temesvár Roman Catholic Diocese, the organ of the Dome was made in 1907 by Leopold Wegenstein, a master organ builder from Temesvár, which replaced an older 18th-century instrument.

The first tower clock is the work of Josef Martin Kidt, a watchmaker from the city, commissioned by Bishop Franz Anton Engl von Wagrain in 1764.

A newer, so-called repeater clock was purchased in 1893 by the diocese.

There are seven bells in the two towers. The oldest came from the workshop of Josef Steinstock, a master bellfounder in Buda in 1762. The solemn consecration of the cathedral took place on April 24, 1803, on the second day of the feast of Saint George, the patron saint of the cathedral. The church was consecrated by the Bishop of Csanád, László Kőszeghy Remetei, who founded the first priestly seminary in Timisoara in 1804. The cathedral has a crypt beneath, which serves as the final resting place for bishops and prebendaries but also high-ranking nobles and former commanders of the city. The last major renovations of the dome took place in 1926 and 1986. Masses in the cathedral are held in Hungarian, German and Romanian.