Past and present side by side: Transylvanian vistas once and today – Part I.

Our news portal set about realizing a project which would offer the opportunity to see segments, details from the past side by side with the realities of the present: our photographer, István Vajk Szigeti takes pictures of the same Transylvanian street scenes that are captured on old post-cards. We’ll take a peek into the history of the chosen location, and the photos will offer the possibility to easily ascertain the changes the past decades or even centuries brought to that same small corner of our Transylvanian world.

The first town in which our colleague took photos is Gyergyószentmiklós (Niklasmarkt, Gheorgheni), located in the Hargita county of the Szeklerland, on the eastern verge of the Gyergyó-basin.

The image of the town had changed several times throughout the centuries. The first settlement was actually located geographically higher than it is today, probably on the upper segment of a creek called Békény, in the vicinity of the György (George) stream, or around the spring of the Csanód creek. The settlement had gradually expanded and moved to its actual location in the 14th – 15th centuries. In the second half of the 16th century, following the 1562 uprising of the Szeklers against the prince’s rule, stirred because of their diminished historical rights, many were demoted to serfdom. Because of their scarce material situation and the taxes they had to pay after their housing lots, several generations had lived on the same parcel, and had built up the patches of land in a typical way.

The urbanization and development of the settlement leaped forward when Gyergyószentmiklós obtained the right to organize fairs in 1607, and after Armenians had settled there in between 1637–1672. At first they lived in houses they rented out from the Szekler population; from the mid 18th century several, mostly merchant families were given permission to build their own houses, and they did not fail to comply: in between 1770–1848 15 new stone houses were built by them. These are characteristic homes of the bourgeois merchants, with religious-themed statues, paintings on their façade.

In the 17th century the town center was in the vicinity of today’s Roman Catholic church. The marketplace was at that time on the so called Small Square, in front of today’s museum building. The territory of 17th century Gyergyószentmiklós was almost as extensive as today’s, but the built-in areas were more spacious, and the lots had houses of several generations built on them. Most of the buildings – except for the church – were made of wood. 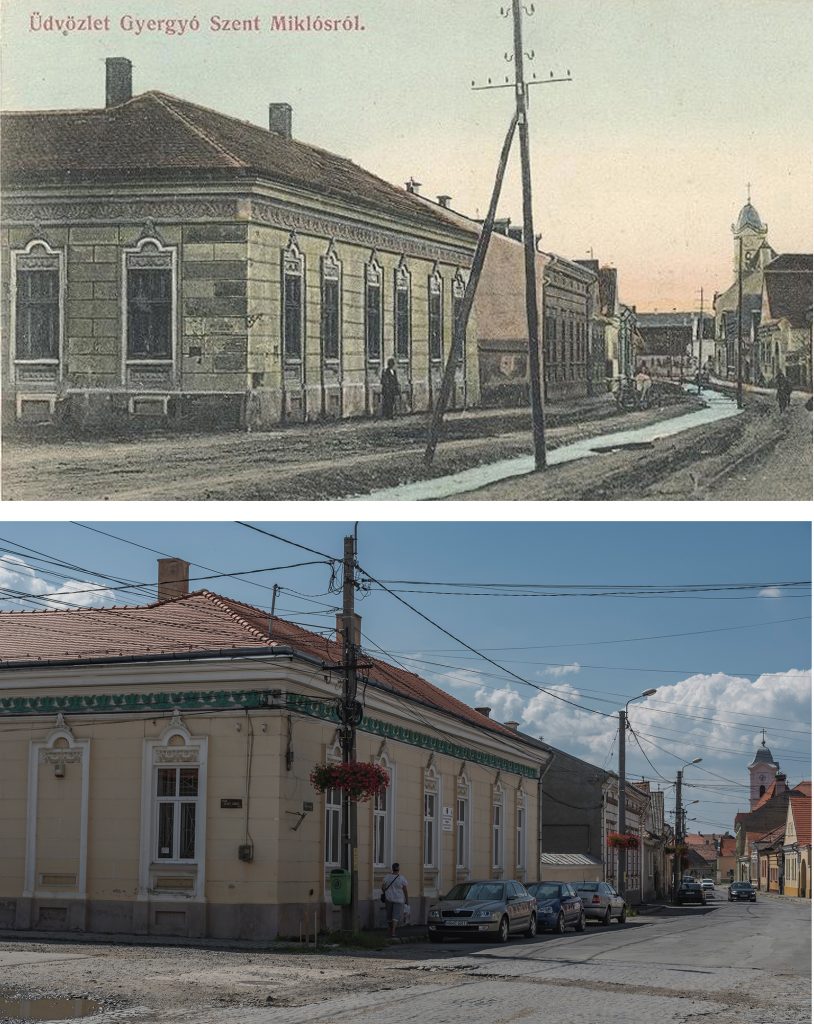 This pair of photos show the Márton Áron street view, in the background with the Saint Nicholas church.

The 18th century was not an easy period, as the attack of the armed forces loyal to the Habsburgs, the famine in between 1716–1719 and the strike of pestilence decimated the population, and many housing lots were depopulated. In the early 18th century the town was structured on small administrative units of medieval origin, called the tenners, the city-like core of the settlement being the so called Middle tenner.

In the 19th century the center of the economical and social life of Gyergyószentmiklós was in today’s Szabadság (Liberty) square and the streets going out from it. That is where the churches, the schools, the stores and the market was, that is where most of the Armenians settled beginning with the 18th century. This is also the location of the baroque buildings from the 18th–19th centuries. In 1808 a huge fire swept through the town, more than 700 houses were destroyed and these were mostly reconstructed out of stone.

According to the census of 1850, there were 969 houses and 5362 souls living in Gyergyószentmiklós, and by 1901 the population increased to 7417. At the beginning of the 20th century 1178 homes were registered in the town, 1068 of these were made of wood, whilst 118 of stone or bricks, and the center was mostly inhabited by families of craftsmen and merchants. In urbanized image of the city center took shape at the beginning of the 20th century.

Armenians and their church in Gyergyószentmiklós

The first Armenian families came to town in 1637; there are written sources proving that, and these mention the establishment of the aliens’ graveyard in 1637, in the location of today’s Armenian church. Religious ceremonies of the Armenian settlers were at first held at private houses until 1692. That’s when they rented the wooden chapel in the aliens’ cemetery. As their community had grown, a proper, bigger church was needed, so in 1729 they began organizing its construction, started gathering donations; the city of Szamosújvár (Gherla, Armenopolis) and some Armenians from Erzsébetváros (Dumbrăveni, Elisabethstadt) had contributed as well financially to the project. In 1733 the walls were already standing, and the church was firstly consecrated in 1733, but officially only in 1772. The church’s building and the tower was renovated several times during the 19th century. The church was fortified in 1748 with a stone wall having gate towers. On the upper side of the gate carved of stone the„Salutis causa nemini clausa!” (This house of spiritual bliss is not closed to anyone!)  inscription welcomes those who enter it. 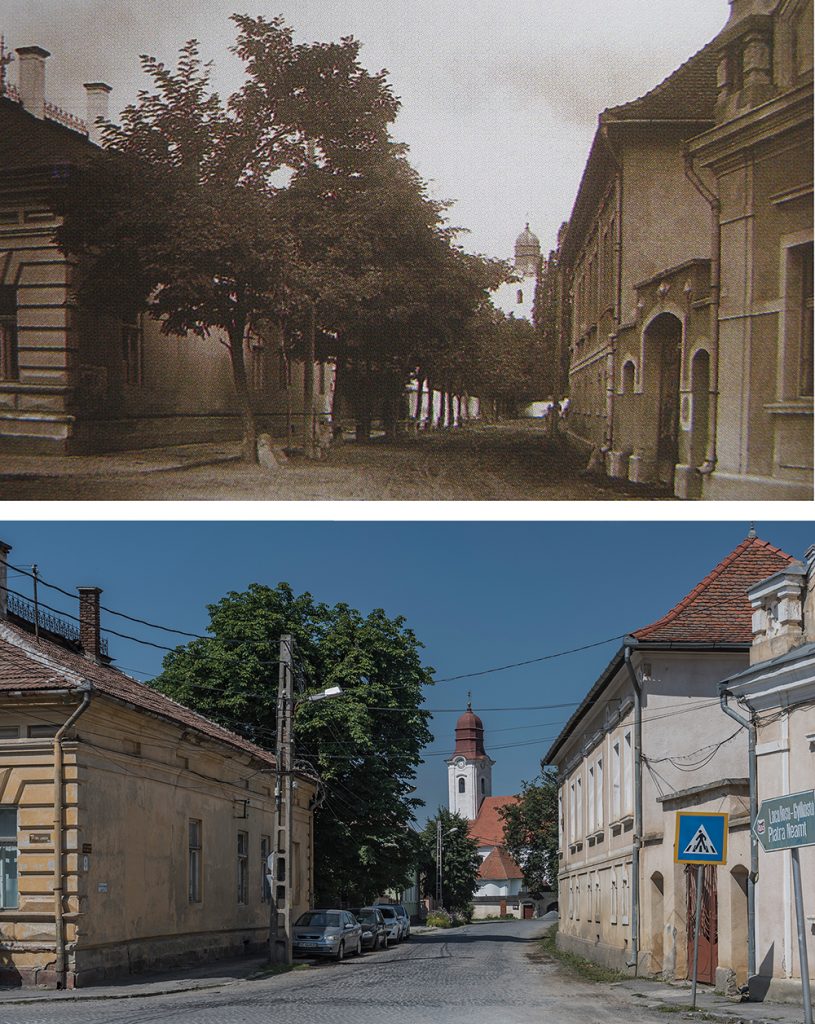 This pair of photos present the past and present view to the so called Armenian Church street in Gyergyószentmiklós.

Title image: Panoramic view of Gyergyószentmiklós, located on the eastern verge of the Gyergyó-basin

Past and present side by side: Transylvanian vistas once and today – Part II.