The program, called Telesuli (Teleschool), was created as an initiative of the Alliance of Hungarian Parents and was made possible by a partnership between the Democratic Alliance of Hungarians in Romania and the Marosvásárhely/ Târgu Mureș studio. There are Hungarian literature and language as well as mathematics classes broadcast for 8th-grade students and Hungarian literature and language, mathematics, biology, physics, chemistry, social sciences and history classes for 12th graders. Students in 8th and 12th grades are a priority right now because they have to prepare for their final exams, but there are plans to expand the service to other age groups as well.

According to the class schedule, Telesuli (Teleschool) classes can be followed on channel TVR3 at 4 p.m. and 6 p.m., on the regional channel in Marosvásárhely/Târgu Mureș at 10 a.m. and 5 p.m. and also on the Kolozsvár/Cluj-Napoca channel at 10 a.m. and 4 p.m. 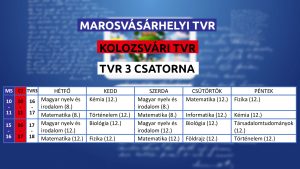 Telesuli is filmed at the Marosvásárhely/Târgu Mureș virtual studio, and the shows will also be broadcast on the website of Romanian Television (tvr.ro) and on Youtube.

The schedule is available on a new online platform at telesuli.rmdsz.ro; teachers can upload lessons here, and all “tele classes” will be available so other teachers can use them, too. 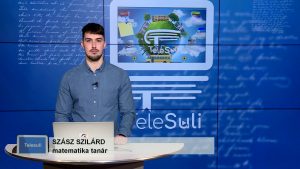 The service will be expanded in case the government extends the state of emergency presently in force due to the coronavirus.

Public education institutions closed in Romania on March 11, and Romanian Television initiated the Teleschool educational program for students learning from home on March 16.