One of Kolozsvár’s medieval gates unearthed

Were it possible to turn back time 150 years, and one would have stood back then on the north-eastern corner of the main square of Kolozsvár (Cluj-Napoca, Klausenburg), one could see an imposing medieval gate and the tower above it on the former Híd (nowadays’ King Ferdinand) street. This fortified gate was the northern entrance point to the inner city. During the rehabilitation works that are being carried out presently, archeologists discovered underground parts of one sidewall of this gate, which has been torn down 150 years ago.

Actually, in the first half of the 19th century several gates and bastions of the medieval fortification of Kolozsvár were still standing; sadly, most of them are now only preserved in the drawings of city architect Lajos Pákei, the British doctor-traveler John Paget and some in the photos of famous documentary photographer Ferenc Veress.

The former Híd (meaning: bridge) street stretches out from the city center to the north. The medieval gate-tower stood right in front of the bridge above the smaller branch of the Kis-Szamos river, the so called Malomárok (Millrace), hence the name of street and gate.

The local media found out about the discovery from the leader of the team of archeologists providing professional surveillance, Sorin Ilie Cociş, who is an associate of the Archeology and Art History Institute of the Romanian Academy. The team of consultants consists of several archeologists and historians from the National History Museum of Transylvania, the Babeş-Bolyai and the Sapientia universities. 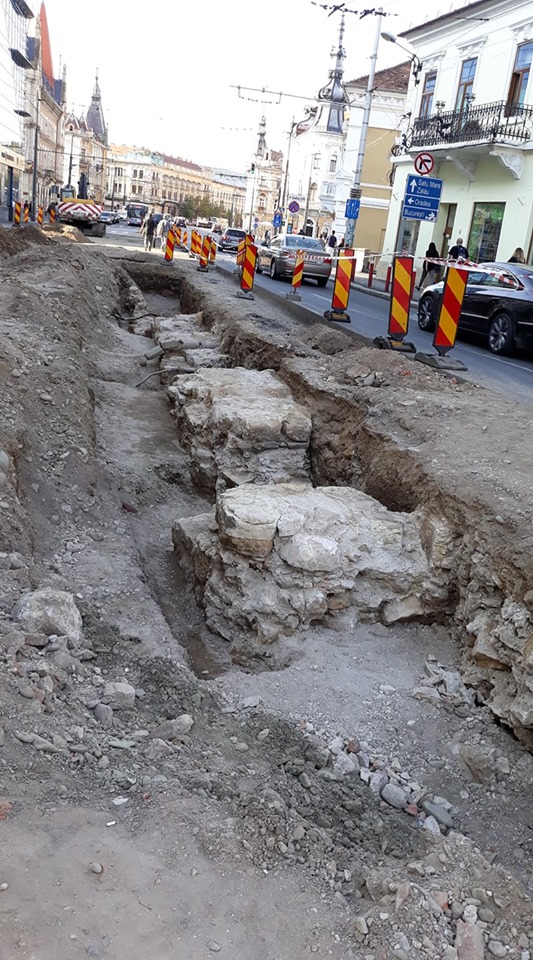 Once an imposing medieval gate-tower stood on this street

“This find is unique in its own way, as the possibilities to perform archeological explorations on a busy inner city street do not show every day; besides, no medieval gate of Kolozsvár was ever researched archeologically” – emphasized art historian, associate university professor Radu Lupescu. As he stated, a section of thefoundation of the western side wall of the gate-tower was discovered. The digging will be extended to the other side of the street, and there is justifiable hope that other parts of the gate will be found as well. The exploration is important mainly because experts will be able to mark the exact place of the former medieval gate-tower in the modern-day topography. The remains of the half a millennium-old construction will be buried back in the ground though, and the place of it will be marked in some way above ground.

The so called Híd-gate of Kolozsvár stood in this location until 1872. Its history is related to the construction of the city’s fortifications during the reign of Sigismund de Luxemburg. By the end of the 14th century, because of the imminent peril of the Turkish military expansion it became indispensable to build thick fortified walls around cities.

On the 2nd of July 1405, by the patent of Sigismund de Luxemburg Kolozsvár became a free royal city, and the king endorsed its fortification. The construction of the surrounding walls was a lengthy process, as the population numbered only 3–4 thousand souls back then. The fortification built in the 15th century used the western and northern parts of the previous, smaller, early medieval walls of Kolozsvár, the so called Old City.

This second fortification encompassed a much larger area, about 45 hectares, and the walls were strengthened with gate-towers and bastions. There were six gate-towers that provided entrance to the fortress and two small gates. The Híd-gate was finished in 1477 and it was maintained by the guild of the locksmiths. On its ground level a large, semicircular portal opened, but on the level above the thick stone walls of the tower had only a couple of embrasures in the form of an inverse keyhole. The doors leading to the tower’s interior opened from the entryway corridor that ran on the inner side of the fortification wall, held by cascading consoles. The upper level of the tower closed in an entryway that had cannon embrasures.

By the mid-18th century, as a new citadel-fortification was constructed by the Habsburgs, the walls and towers of the city lost their strategic importance. Besides, in 1790 the seat Transylvanian government moved to Kolozsvár, so the economic, social and public life boosted, and the city began to grow at an unprecedented rhythm. Ignoring the protests of the city-esthetics committee of the government, the authorities started the demolition of the medieval fortification, as it provided material for the construction of the new public buildings. The demolition of the gate-towers started in the 1840’s and by the end of the 19th century most parts of the medieval fortification was gone.

Title image: The gate-tower of the Híd street in 1860. Photo realized by Ferenc Veress.