No joint Hargita carnival, but the shows go on

This year, there will be no joint carnival in Szeklerland’s Hargita County. Due to the pandemic situation, the 29th Carnival Farewell Celebration will not be held as one big event in one location as it used to be; instead, winter will be chased away by carnival processions organized in 13 locations in the county, the Székelyhon.ro news portal reported.

The last few days of the carnival season are celebrated through merry rituals in quite a few parts of Transylvania. It is said that these customs — the exceedingly joyful processions of masks and costumes, the chanting of witty rhymes, the jokes and pranks, the lighting of fires — have their origins in belief-systems that pre-date Christianity. These rituals are actually celebrations of life over death, of spring over winter. One of the most representative events is called the farewell or the funeral of the carnival, a symbolic way of putting an end to winter.

This year, the funeral of the carnival will be organized between February 13 and 17 in 13 localities of Hargita County, by 13 folk tradition groups. The good news is that since the end of winter will be celebrated in several Szekler settlements, local traditions and carnival customs will be brought to life, and the sense of belonging to a community can also deepen, organizers pointed out to Székelyhon.

In the village of Csíkcsicsó (Ciceu), the carnival procession will start on February 13 at 9 a.m., from the city hall, while in Gyergyószárhegy (Lăzăreni) on the same day at 1 a.m., it will start at the local cultural center. In the village of Csíkszentdomokos (Sândominic, Sankt Domenikus), carnival participants will gather on February 14 at noon, at the Roman Catholic Church. Celebrations will start at the same time at the old Roman Catholic Church of Csíkszentkirály (Sâncrăieni, Heilkönig).

The ceremony will start at the house of culture in Kászonaltíz (Plăieşii de Jos) on February 16 at noon; on the bridge of Kászonimpér (Imper), a rather impressive traditional carnival ritual will also be performed — the “striking down of the bull”: a man behind a straw dummy portrays the “bull” and his owner tries to sell him to several people. As usual, there will be no deal, as everyone will consider the “bull’s” price to be way too high, thus the owner will angrily strike down the useless animal, breaking his head (a clay pot).

In the village of Gyergyóremete (Remetea), the funeral of the carnival will be organized on February 16 at 6 p.m., while in the city of Szentegyháza (Vlăhiţa), it will be at 7 p.m. 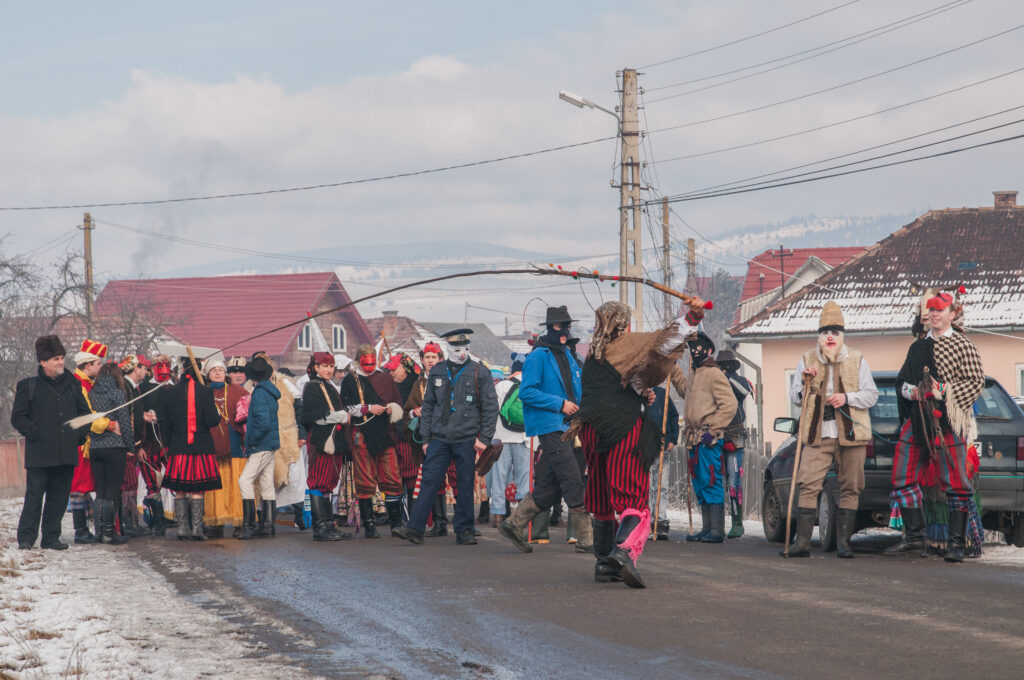 Whip-cracking is part of the rituals meant to chase winter away.

In the city of Gyergyószentmiklós (Gheorgheni, Niklasmarkt), the carnival’s farewell will be held online, with events starting on February 14 at 1 p.m. Carnival burial is a long-standing tradition in Gyergyószentmiklós; during the joyous festivities, people chase away winter by chanting playful rhymes, whooping and cracking whips. The symbolic duel of Cibere Voivode and King Konc is also staged during the celebrations. As these two figures are the symbols of fasting and of abundance, their symbolic duel marks the end of the carnival period. The name of Cibere refers to a typical soup that can be eaten during Lent, as it has no meat in it, while Konc stands for fatty, meat-based foods.

The guests of the online discussions plan to detail the ethnographic, tourist and cultural aspects of the carnival traditions of the Gyergyó region. Those interested can learn about the secrets of weaving the so-called hooped whip (karikás ostor in Hungarian) and also how it can be properly cracked. Carnival doughnuts and cumin brandy (a typical Hungarian drink, pálinka seasoned with cumin) will be also made.

The online carnival show will be available on the Facebook page of the Gyergyószentmiklós Cultural Center, and a detailed program can also be found there.

In addition, the municipality of Gyergyószárhegy has compiled a quiz game as part of the program series, which includes ten carnival-related questions and a bonus question. Responses are expected on their Facebook page by 1 p.m. on February 12. The winner will be invited to a carnival study trip to the Kászon microregion in Szeklerland and will also be rewarded with a gift package, Székelyhon.ro wrote.

Title image: A merry carnival procession with masks and costumes, accompanied by musicians. The photo was taken during last year’s carnival in Hargita County.