The tower needs to be put under a roof before winter

On October 2nd, a fire broke out in the western tower of the Unitarian church in Bethlenszentmiklós (Sânmiclăuş, Betelsdorf). Firefighters rushed to the scene, but they could not save the tower’s steeple from the flames, as it was covered with shingles that burned quickly.

The Unitarian priest, Ferenc Veress, informed the Hungarian news agency MTI that the church’s tower bell, which dates from 1631, cracked due to the heat but thankfully did not fall down. The priest was in the courtyard of the parish when he heard a crackling sound coming from the tower, which was already engulfed by flames. He had no idea at first what could have caused the fire. According to the communiqué of the disaster control service inspectorate of Fehér (Alba) county, firefighters have now determined that the disaster was caused by a short circuit in one of the tower’s small lamps. Now, both church bells have been taken down so as to make it easier to repair the tower.

Ferenc Veress told MTI that the congregation had already intended to restore the church. Before the fire struck, they had projected that in October soil samples would be taken and the planning of the reconstruction could begin. At this point, however, the most pressing task is to evaluate the state of the tower and build a roof over it before winter comes, as if it remains uncovered, the structure will degrade very quickly.

Bethlenszentmiklós is a village in Fehér (Alba) county, located on the shore of the river Kis-Küküllő (Târnava Mică, Kleine Kokel), and is one of the few areas in the county where Hungarians are a majority. The village has a total of 1,381 inhabitants, and in the 2011 census, 56 percent of the population declared themselves to be Hungarian – and about half of these are Unitarian. Administratively the village belongs to the commune of Szépmező (Şona, Schönau), in which the percentage of Hungarians is now only 24%.

The church was built in the Middle Ages and is a historic monument. Its design indicates a 14th-century construction, but the settlement surely had a church in the 13th century as well; a document from 1309 proves that there was at this time a parish church consecrated to Saint Nicholas, hence the name of the village. In the 17th century, a large restoration was carried out, which is probably when the tower of the western façade was built. The stuccoed vault most likely dates from the 18th century.

The battlemented tower had a bell from 1622 that bore an inscription with the name of the famous Transylvanian prince Gábor Bethlen. This bell was taken down in 1916 to be used as cannon material. Luckily, somehow it was saved from this fate and ended up in the custody of the Hungarian National Museum. In the second half of the 16th century, the ideas of the Reformation spread quickly in Transylvania: The originally catholic villagers converted to Calvinism, and then many of them became Unitarians. The medieval church has remained in their possession ever since. 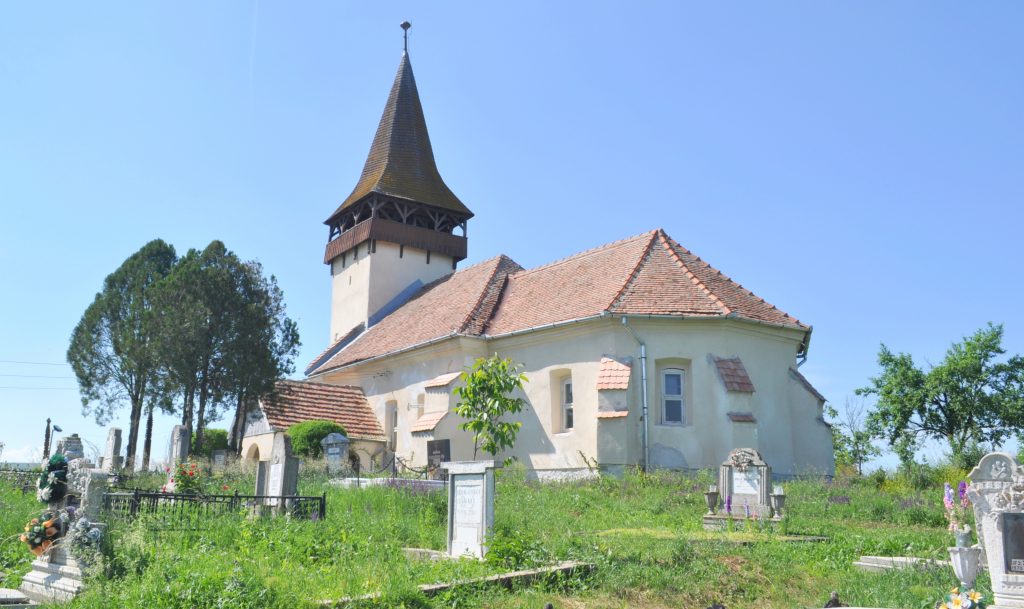 That is how the historic church looked before the fire

The Unitarian congregation of Bethlenszentmiklós consists of 320 souls. Several locals have already volunteered to help clear out the damage caused by the fire. The cost of the reparations, which need to be carried out soon, represent a huge financial burden for the small congregation. The Hungarian Unitarian Church has communicated that they started collecting donations for the rebuilding of the tower and covering it with a roof. Those who would like to help the community can donate to the account: RO19 OTPV 2000 0034 8014 RO01, with the note “Donation for the Sânmiclăuş church.”

Title image: The tower’s steeple was completely destroyed by the flames, the big bell cracked