After the death of their heir-less king of Poland in the second half of the 16th century, nobles resorted to a time-honored tradition: election of a new monarch. Overcoming two other formidable candidates, the job was eventually given to — wait for it — a Hungarian.

“We have lost a sage king, a fair judge, a brave and diligent commander-in-chief,” according to one mourner following the death of the Hungarian. “We have lost the ornamentation of our country, the protector of our safety, the brilliance of our dignity…”

But who was this king of Poland, thus remembered by Polish Renaissance diplomat, statesman, and political writer Krysztof Warzewicki (Christopher Varsevicius) in his funeral speech in 1586?

Born in Szilágysomlyó (Romanian: Șimleul Silvaniei), some 560 km (350 miles) South of Krakow in 1533, István Báthory was raised in Vienna, at the court of Ferdinand I., where he acquired a considerable formation in the humanities and learned to speak several languages. Despite the growing Protestant wave in Transylvania, he remained true to his Roman Catholic faith.

In August 1541, the Hungarian Kingdom split in three: one part was controlled by the Ottoman Empire, another part by the Hapsburg Empire and the third part, Transylvania, became a quasi-independent territory.

The Prince of Transylvania, János Zsigmond, died unexpectedly in 1571. After some diplomatic to and fro between the Hapsburgs and the Ottoman Empire, Báthory was named the new Prince. But history had another fate in store for him.

Following the death in 1572 of Sigismund II, the King of Poland who had no heirs, Henry of Valois was elected as the new king. But upon inheriting the French throne, he left Poland in 1574. 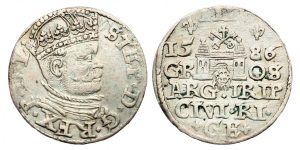 So a new king had to be elected – it was now November 1575. There were no less than six self-appointed candidates, including Ivan the Terrible, Maximilian II. of the Hapsburgs and Báthory. And there was, of course, some bribery involved – Ivan left the race after Maximilian offered him some Polish territories in Livonia.

The election of a king was a fairly old, but rarely needed institution – in fact, their first elected king was also a Hungarian – Louis I of Hungary. On December 12, 1575 interim ruler Jacob Uchański proclaimed Maximilian II King of Poland.

But a group of lesser nobles led by chancellor Jan Zamoyksi elected Anna Jagiello – sister of the late Sigismund – as Queen and Báthory married her, thus becoming King jure uxoris (Latin for “by right of husband”). After quelling in battle a rival sent by Maximilian, Báthory ascended the Polish throne on May 1st, 1576.

During his reign, he shored up and centralized power in both Transylvania and Poland, overcoming the opposition of regional magnates and noblemen – by force, when necessary.

A hard condition of his election was, to regain the Baltic area from Russia. But the Polish nobility was reluctant to contribute troops to this campaign of their own devising, so Báthory was left to his own resources. He eventually defeated Ivan the Terrible in 1581.

He pursued a policy of religious tolerance, guaranteeing freedom of religion and equal rights both in Transylvania and Poland by the edicts of Torda (Turda, Romania) in 1568 and the Compact of Warsaw in 1573.

Also Grand Duke of Lithuania by his marriage to Anna Jagiello, he founded the Vilnius Academy in 1579. He established court in Krakow, hosting a plethora of Italian scientists and artists. 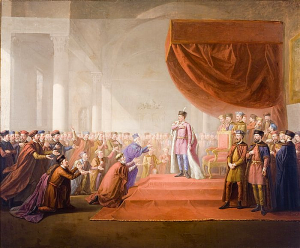 His ultimate goal was to build a powerful Central European kingdom to guarantee Transylvania’s independence from both the Austrian and the Ottoman Empire. Under his rule, Poland became a major regional geopolitical  player, delivering stability and forging Central Europe’s own destiny – for a time, at least. To this day, Poles remember him as Stefan Batory, one of their most successful kings, and Lithuanians remember him as Stepanos Batoras.

He returned to his native Szilágysomlyó only in 1586, for burial.