The historic narrow-gauge railroad that once crossed parts of the Transylvanian Central Mountains (Erdélyi Szigethegység in Hungarian, Munţii Apuseni in Romanian) was abandoned by the authorities, the ziare.com news portal wrote in a recent article. The 94-kilometer-long line was built between 1910 and 1912, in the era of the Austro-Hungarian Empire. It was constructed with narrow-gauge track, a cheaper alternative as it crossed mostly rugged, mountainous terrain. The train ran between the Transylvanian cities of Torda (Turda) and Abrudbánya until 1998 and was commonly known by the name “Mocăniţa,” as members of an ethnic Romanian, pastoral community in the area are called “Mocani.” The Mocăniţa was officially put into operation on June 20, 1912, and was decommissioned in 1998.

This train had been the most important means of transport for the people living in villages throughout the valley of the Aranyos (Arieş) River and also for communities living in the highland areas, the so-called Moţi (Mócok in Hungarian, Motzen in German). The “Land of the Moţi” (Motzenland) is an ethnographical region in Transylvania, with scattered mountain villages, located at altitudes of up to 1,400 meters. The “Moți” were also known as “Topi” (Die Zopfen, meaning the ones with braided hair).

The Mocăniţa, which had a steam-fueled locomotive until 1970, also passed through two tunnels in the lower area of ​​the Aranyos Valley, where the terrain is more rugged. In the last years of its service, three round-trip trains ran daily on the route: one express and two slow passenger trains. The express train covered the 94 kilometers in about 5 hours and 30 minutes (stopping at only six stations), while the slow ones took about 6 hours and 30 minutes, stopping at all stations. Its maximum speed was 40 kilometers per hour, but this was rarely reached due to the numerous curves along the route.

For this reason, it was relatively easy to get on and off the Mocăniţa even while it was moving — this was one of its more popular characteristics. “The roar of the locomotive could be heard all over the hills, and people knew what time it was when they heard the train departing from one of its stops on the route,” ziare.com wrote. The train would also stop between stations; passengers just had to signal the conductor by waving their hands that they wanted to get off, and he would stop.

Sometimes, the Mocăniţa got so crowded that people sat on the stairs of the cars, or even on top of the wagons. For instance, the famous “Girls’ Fair on Găina Peak” was an event that attracted crowds of tourists. This folk festival was first documented at the end of the 19th century, but it is probably older. Families from all around the neighboring villages gathered at the fair organized on the so-called Găina (“Hen”) peak, where young men could meet unmarried girls and maybe choose their future wife. “Negotiations” with the fathers of the girls became a custom. 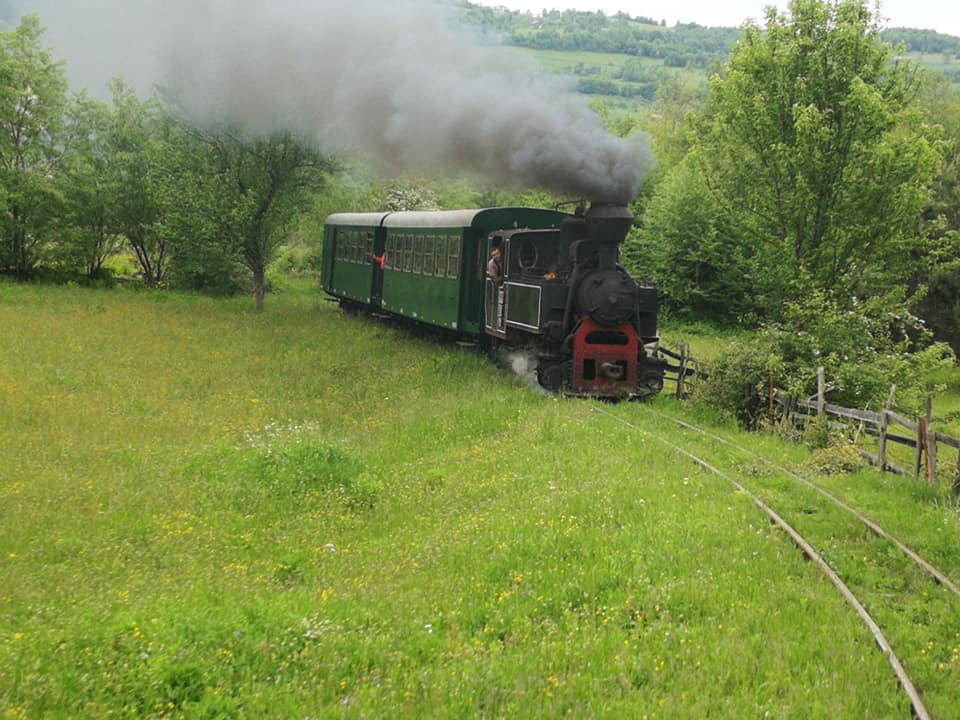 As the number of automobiles grew, and the industries in the mountains (the mines at Aranyosbánya, Verespatak and Abrudbánya and the wood-processing factory in Topánfalva) decreased their activity, the Mocăniţa was not considered profitable enough, so in 1998 it was taken out of service. In the absence of the sizeable investments needed to preserve the line, both the stations and the bridges along the route fell into a state of decay.

In 2006, a portion of the Mocăniţa’s line crossing the territory of Fehér (Alba) County in southern Transylvania was registered on the list of local historical monuments under the name “The narrow-gauge railway ensemble between Abrud and Vidolm.” Many had hoped that the Mocăniţa could be put into service again using European Union funds. Sadly, this did not happen, as parts of the railway track in Kolozs (Cluj) County, (between the city of Torda and the village of Vidaly/Vidalm) were removed by Romanian Railways (CFR). Furthermore, although the Fehér County Council had the portion of the Mocăniţa railway going through its territory registered as a historical monument, the Kolozs County Council failed to do the same for the parts located within its boundaries. Also, by now, several of the former station buildings are in terrible condition due to the lack of maintenance, ziare.com added.

“The narrow-gauge railway has been destroyed out of carelessness, wickedness and incompetence, betraying the interests of the inhabitants of the Arieş Valley. Though promises are made before every election, there is little chance that the train will be put back into service. It was lucky that the one Austrian guy invested lots of money in the Câmpeni-Abrud section, but this section is only 11 kilometers long, Petru Suciu, a former railway worker for the Mocăniţa, told ziare.com.

On the abovementioned section of the railroad, traffic resumed for tourist purposes thanks to an Austrian investor, Georg Hocevar, who moved to Romania almost two decades ago. He has a passion for rehabilitating steam-fueled locomotives and is president of the Association for Narrow-Gauge Railway Maintenance in Romania.

The Mocăniţa has appeared in movies as well, ziare.com wrote. Some of the best film images that have remained in the archives are from the feature film Iubiri Trecătoare (“Passing Loves”), made in 1974. The final sequences were filmed on the train and in the former train station in Aranyosbánya (Baia de Arieş), ziare.com wrote.

Title image: The Mocăniţa was popular among tourists, but it was also the most important means of transport for people living in the Erdélyi Szigethegység/Apuseni Mountains.