Healthcare spending to GDP lowest in Romania and Luxembourg – Eurostat

Romania allocated only EUR 580 per capita for healthcare expenditures in 2018, which is the lowest registered amount for all member states in the European Union, followed by Bulgaria with EUR 590, according to data published on Wednesday by Eurostat. Interesting fact, examining the data from another perspective, as a share of GDP, the last country is Luxembourg (5.3 percent of GDP), while Romania is second to last at 5.6 percent. 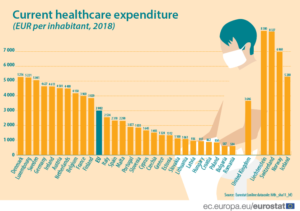 Relative to population size, 2018 healthcare expenditures among the EU Member States were the highest in Denmark (EUR 5,260 per inhabitant), Luxembourg (EUR 5,220) and Sweden (EUR 5,040) while the lowest was in Bulgaria (EUR 590) and Romania (EUR 580). The EU average is EUR 2,982 per capita. So, Luxembourg spends almost 10x more than Romania in terms of spending per capita.

But, it is also worth looking at the Eurostat data from another perspective, that is, healthcare expenditures as a share of a country’s gross domestic product (GDP). Here, we find that while Romania is still at the bottom of the list — being second to last (5.6 percent of GDP) — Luxembourg comes in last place (5.3 percent) when measuring spending as a percentage of GDP. 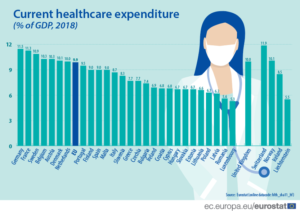