Easter “border” tour: honoring the land per the Szekler faith

Hundreds of horsemen crowd the borders of the villages in the Gyergyó/Gheorgheni basin on the morning of Easter Sunday: Szeklers from the villages march on horseback, in carriages and carts, and by foot, dressed up as hussars and in traditional Szekler costumes. They meet at the Hármashatár/Triple border to pray and to ask God to bless their crops in the area. In the Gyergyó/Gheorgheni Basin, locals still follow the exact same program for the event, inherited from their ancestors.

But, naturally, the program will not be the same this year. During the current coronavirus crisis, health and safety are a priority for Szeklers. Now, people must pray at home and think of the Easter tour only in their minds. Children in the participating villages will stick their noses to the windows in vain, awaiting the long, spectacular procession of horsemen. But the beautiful Szekler tradition will certainly live on next year, as if nothing had happened. The land must be blessed year after year…

“This is not a picnic; we go to pray,” Catholic priests remind people. “This is a tradition with a religious background. As long as God and piety are not absent, the practice will have a future. People participate to show gratitude and ask for a blessing on the land and also on the people working the land,” the Catholic Church emphasizes year after year.

It is not known exactly when the tradition of the Easter “border” tour was established in the Gyergyó Basin, but it supposedly dates back to medieval times. We do know that it was already taking place in the early 1900s, up until 1949 when it was banned. After a pause of 40 years, it was organized once again in 1990. Since then, the horsemen, footmen and those in carriages from Gyergyószentmiklós/Gheorgheni, Tekerőpatak/Valea Strâmbă, Kilyénfalva/Chileni, Gyergyóújfalu/Suseni, Gyergyócsomaflva/Ciumani and Gyergyóalfalu/Joseni have met and marched to the Hármashatár/Triple border.

The elderly, who are only able to come and welcome the horsemen at the church, take pleasure in sharing stories about bygone times. They say that during communism, when the event was banned, villagers would still remember it fondly. “It was beautiful; villagers marched on their horses over the land as if their lives depended on it, as if our survival as a nation depended on it. This is how our fathers and grandfathers did it, so this is how we are doing it now. We believe that God will save our crops if we respect the land,” an elderly Szekler man relates in great faith.

After the dark years under the Romanian communist regime, villagers got back to their roots. In the 90s, this Easter tradition came to life again. The late István Hajdó, archdeacon from Gyergyószentmiklós, looked into how the program and prayers had taken place in the past, and József Páll, officer at the mayor’s office as well as a farmer, assembled the horsemen, carriages and carts. The horses were arranged according to size and color, and he held rehearsals for four days before Easter. If anyone failed to attend, they could only be at the back of the procession on Easter day. 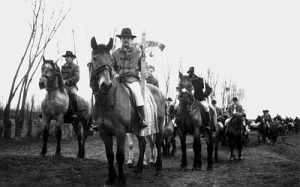 The tradition of this Easter tour is said to date back to medieval times, when people would also announce the great victory of the Lord, the resurrection of Jesus, partly to celebrate together with nature but also to deter evil spirits and natural disasters with the power of the Resurrected. It was one of the many feast-day processions held during the year, when villagers prayed on their land with religious symbols and flags, marching while singing and praying for a bountiful harvest.