Parents love it because they see their baby smiling, while children enjoy its tiny rhythmic movements. The designers of the Beto swing hammocks manufactured in Csíkszereda have not only conquered the hearts of parents in their homeland but have also gained admirers in the farthest points of the USA.

“We didn’t reinvent the wheel but transplanted the ‘soul’ of an old object into a modern swing that goes beyond what a simple swing can offer. Keeping the minimalist style in mind, we added just the comfort elements modern babies and parents need to this swing,” Beto swing inventor László Szentes tells TransylvaniaNOW.

The Beto swing is a minimalist, aesthetic and comfortable utility. It comes with an adjustable suspension cord, a sturdy support rope that holds the untreated wooden beams. The 100% cotton canvas that serves as the child’s moving nest adorns these beams, and inside you have a cotton mattress and pillow that come in a wide range of colors. The swing package can be upgraded with a spring for vertical movement as well.

The Beto swing was born out of personal necessity

“It all started in 2009 with the birth of my first son. We noticed that he felt good when we took him up in our arms, or we were on the move, in the car, so anywhere was better than his bed. So, I started my own research into a variety of accessories we could use, and the consensus was to use a swing. After reading the patent documentation of more than a dozen patented American swings, we put the pieces of information in place and started our own experiments with shapes and materials. My wife and I designed three or four swings and tested them on our son. Our experiments focused on comfort and child safety,” László says.

The child reacts in an instant if he dislikes something, so the tests produced immediate results. “We fine-tuned every millimeter of the swing and elaborated on every step from material selection to the final product. After finding the right formula in terms of shape and comfort, and our newborn son giving it a five-star review, we started using the then-unnamed homemade swing,” he adds.

The news of the homemade cradle-swing got out and spread through word of mouth after the Szentes family was visited by friends who were dealing with the same challenge every parent has: It’s hard to keep the baby in your arms all day and keep him/her entertained while keeping up with other daily tasks. After friends saw the Szentes’ invention, they asked László to make them one as well, and then for another friend, and another, and the order list started to get longer and longer.

The Beto swing gets trademarked and patented

“Looking at it, we realized that we were in uncharted territory – although there are similar products on the market manufactured in Hungary – so we started thinking about a name. Even though there are similar-looking swings, our product was different and enjoyed more popularity because of its practical use cases,” László tells TransylvaniaNOW in a humble voice.

“We searched for a new name, which is a hard task nowadays. The name is, I recall, ultimately related to my grandfather, Albert. I remember feeling so good in his company, as he liked to swing me, and from his name, we came up with this fantasy brand name of Beto. It sounds good, and it’s good for a swing.”

Finally having a name, at the end of 2010/early 2011, the Szentes family started working on a website and registered the Beto brand name with the Romanian OSIM, the State Office for Inventions and Trademarks; they also patented their work, the design of the Beto swing.

Almost every child loves to swing. Those who don’t also have problems traveling by car. So, what’s happening while swinging? According to Tom Norquist, “While swinging, we experience a full range of sensations, from the calming rhythm of our to-fro movement, to the excitement of rapid travel through space and time. These experiences are linked to pre-birth movement in the mother’s womb and the child’s first sensation of gravitational forces.” 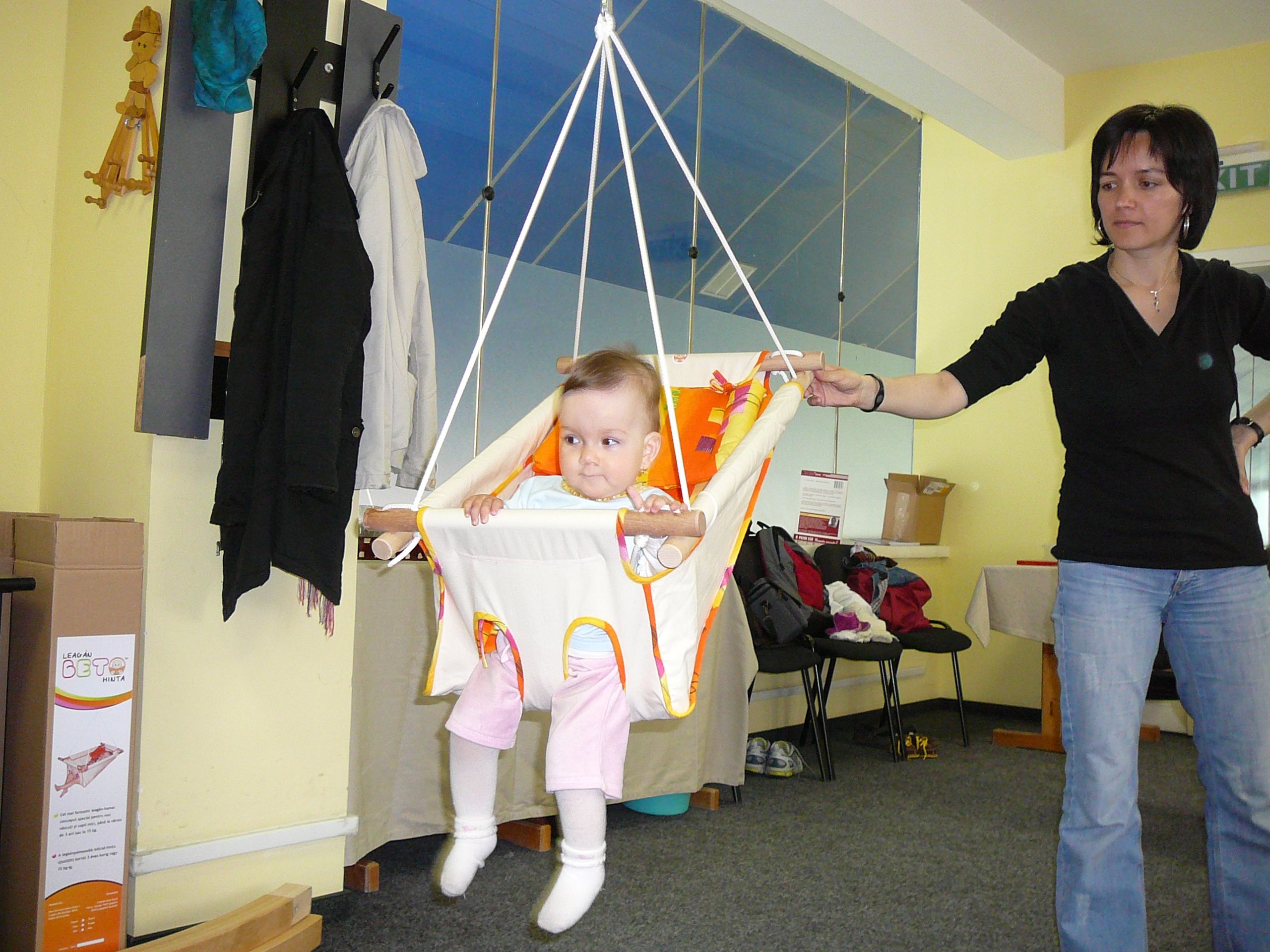 Swinging has lots of benefits for our body: It stimulates our vestibular and proprioceptive systems. While swinging, the three semicircular canals in the inner ear are responding to movement and acceleration in 3D, and that stimulation improves our sense of balance.

László has worked together with physiotherapists to find out what they think about his and his wife’s invention. As it turns out, their feedback corroborated their own research and gave them an additional boost in their belief in their Beto swing.

Before marketing the product to the wider public, the Beto swing received CE-EN71 certification, so it meets the EU standards for child safety.

“From the moment of conception until birth, the child is in a moving space: The mother is in continuous movement, so the child is also on the move. When the child is born, parents place him or her in a bed, which is fixed. So, how can you expect the child to feel good in this new environment, when for nine months, he or she has been used to a different lifestyle?” László says laughing to TransylvaniaNOW.

“Parents can use the Beto swing even with newborns but need to keep in mind that this isn’t a replacement for a bed. While the child takes a nap in the swing, parents can focus on their daily tasks while keeping an eye on both the baby and the cradle. However, when the children learn to walk, the swing is no longer interesting because they want to explore the surrounding world on foot. After spending enough time exploring, however, they will want to enjoy the relaxing side-to-side and up-down movement of the swing. The product is a great fit for kids until they reach the age of 3; after that, it becomes too small for them.” 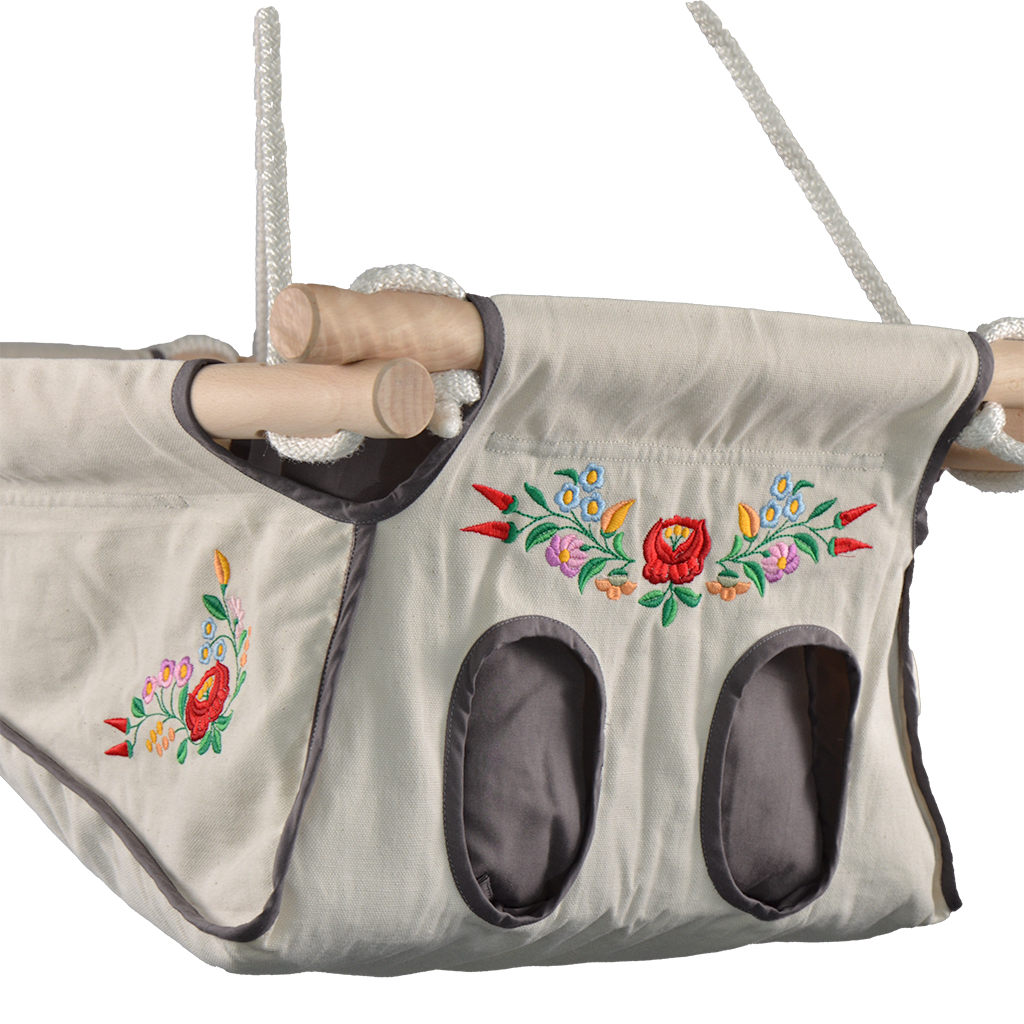 Considering the above, coming up with a swing for bigger children was a natural evolution of the product lifecycle. After 18 months of testing and joint work with physiotherapists, Szentes has launched a second product, a new swing that goes by the name of Droppo.

Now, the Beto and Droppo products can be purchased through an online shop designed for the Romanian market, but those interested can also purchase them from resellers based in the UK, Slovakia, Hungary and Denmark.

Title image: Child in a Beto swing. All images courtesy of László Szentes.

Only 10 out of 30 vaccination centers work in Kolozs County

Vaccination proof required at University of Bucharest in 1928