Baroque castles and medieval houses on sale in Transylvania

There is an interesting and definitely attractive segment of the Transylvanian real estate market, that has recently developed and became more organized: castles built by famous aristocrats, manors, villas, or even houses of Saxon citizens built in the medieval ages are on sale. For the odd million or four of euros you can become the new lord of a several hundred year-old castle built by the most powerful people of their time in these lands.

Just as great international auction houses operate, a company called Artmark Historical Estate offers for the first time in Romania a well-managed access to this special market segment. The historical buildings this auction house offers for purchase are representative architectural jewels. As Artmark states, the mission of the business initiative is to rediscover and preserve architectural and artistic values. Artmark combines a whole network of real estate brokers and art vendors from all across the country, and claims a business brand based on trust, integrity, discretion and excellence.

The auction house rightfully stated that their business initiative is meant to preserve values: the fact is, that several of the buildings they have put on the market have a greater goodwill value then their estimated one, and most of the properties are on sale because the owner cannot manage to maintain them in a proper condition, give them a function, or even restore them.

Such is the case of the biggest baroque castle ensemble of Transylvania, the called Wesselényi castle of Zsibó/Jibou, which was built between 1779 and 1796, and the useful property surrounding it is about 2,200 square meters. The baroque-style stately home and the imposing stable near it were built by the older baron Miklós Wesselényi, a well-known figure of the 18th century Transylvanian public life.

The stable was commissioned as a representative baroque building as well, as the Wesselényi family was a proud owner of a very valuable stud farm, and the management of this farm was passed as a dedicated task from father to son.

The most famous owner of castle and property though was the younger baron Miklós Wesselényi (1796–1850), a leader of the so called Reformer opposition in Hungarian political life, a sportsman and politician of legendary strength in both senses of the word. He is known in popular culture as “boatman of the flood”, as during the great flood of 1838 that devastated large parts of Pest (you know, the Pest side of Buda-pest) he fearlessly sailed with a boat throughout the city and saved many people from drowning. He was also famous for his – successful – duels, and he was the first one to swim across Lake Balaton. He was a skilled horseman and had even bread a specific, very fast racehorse breed. He commissioned a beautiful English garden, and a Viennese landscaper has created it for him. Miklós Wesselényi also establish the first nursery school in Transylvania, and was the first land-owner who freed the peasants from serfdom and schooled them. 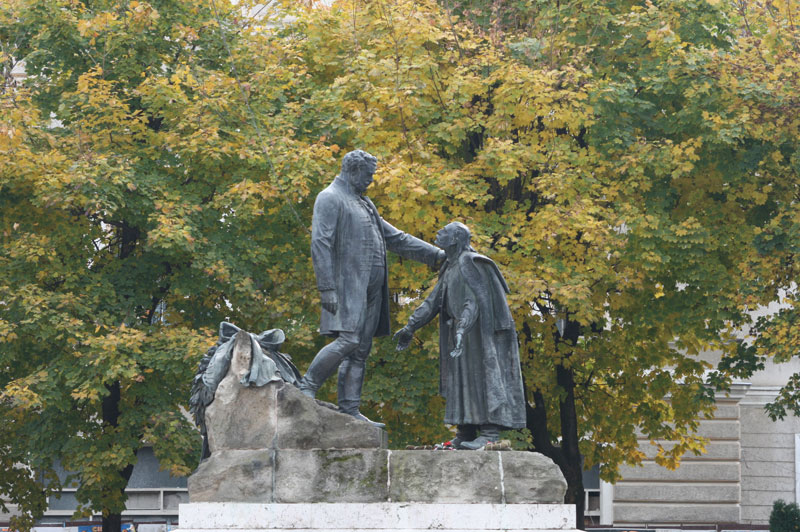 In the city of Zilah (Zillenmarkt, Zalău) the statue of the younger baron Miklós Wesselényi stands in the old central square, and it is the work of the renowned sculptor János Fadrusz. He is portrayed with one of his freed serfs. (Image: lexikon.adatbank.ro)

The castle was nationalized during communism; the rightful owners had to move to a forced residence. A major part of the English garden was transformed in 1968 into a botanical garden with huge glass spheres serving as green houses. The castle itself functioned as a school, then as the house of pioneers. Pioneers were the elementary and middle graders belonging to the child movement organized according to the communist ideology. The interior furnishings disappeared throughout the decades after nationalization.

After the regime change, Miklós Wesselényi’s descendant, Éva Teleki Janicskó claimed back the property. The castle and 1,3 hectares of the former garden of originally 10 hectares were restituted after more than 15 years of lawsuits in 2012. The family had begun reparations on the main building wing, but – according to former reports – they had also realized that they do not have the means to self-sufficiently renovate the building ensemble.

So the renowned aristocratic castle and property is for sale ever since 2014, and it would seem that it awaits the owner who has both the means and the vision to give it a future.

According to Artmark, the estimated value of the Wesselényi castle ensemble is between EUR 1.5–1.7 million, the starting price is EUR 900,000. The former home of the “boatman of the flood” is just one example though of the several beautiful houses and mansions presented to the potential buyers on the website.

One can surf between the offers presented  according to the country’s regions, but can choose between several categories as well: besides historical and modern there are other types of groupings, such as castles/manors, alpine/hunting, lakeside/marine, urban/suburban and so on.

Even if you don’t happen to have a few million euros lying around, it is still worth perusing the site as it gives a good cross-section of the country’s forgotten or neglected architectural treasures and might even give you some ideas for your next vacation.

Title image: The main wing of the Wesselényi castle, with an arcaded loggia in the central part of the façade