Several hundred people protested in Tusnádfürdő (Băile Tușnad in Romanian) last Friday, highlighting the importance of resolving the bear issue as soon as possible. Tusnádfürdő might be the town the most heavily affected by the presence of bears, as the wild animals visit the spa town every day, causing damage and scaring tourists away. According to locals attending the protest, loss of income from tourism has also created a critical situation, Hungarian news portal maszol.ro reports.

The protest was organized by locals, civil organizations and representatives of the local council, all of whom asked people to join them to raise awareness of the severe bear problem. By their small demonstration, they wished to draw the attention of the competent authorities to the need to resolve the problem.

In June, people alerted the authorities over 80 times in Hargita (Harghita) County because of the big game; most of the cases happened in Tusnádfürdő, where bears roam every day, Gheorghe Suciu, the spokesperson of the Hargita County Gendermaire, said while people gathered next to the ski slope of Tusnádfürdő. In the end, 500 protestors attended the demonstration, holding bilingual banners and boards with texts urging for a solution to the situation and supporting Minister of the Environment Protection Barna Tánczos. 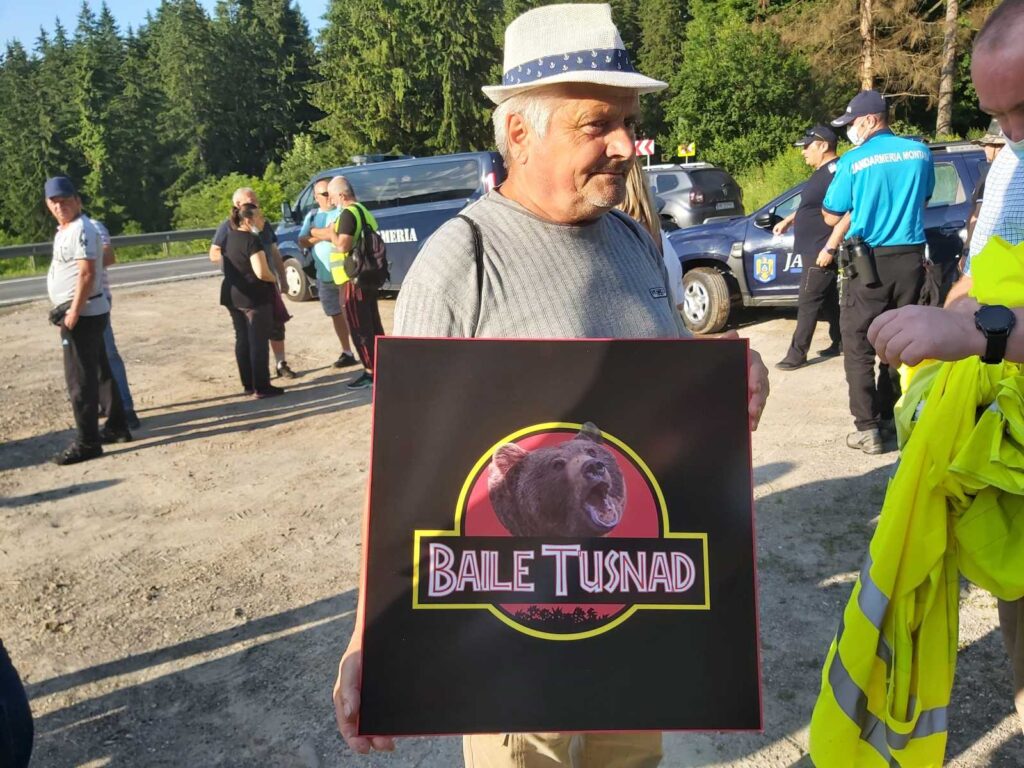 The situation in the settlement is intolerable, Zsolt Butyka, the mayor of Tusnádfürdő, told maszol.ro. The mayor himself has had issues with bears; a couple of weeks ago a mother bear with cubs broke into his garage. “We are terrorized day and night, we are not safe in our own homes. Over the course of the last couple of weeks, bears have broken into more than 60 places; just in the last two nights, there have been eight such incidents,” Zsolt Butyka said. The mayor added, they cannot live like this, and “everyone has reached the point where they feel this cannot go on any longer.”

The protestors have written a petition, which they will send to nine recipients, Zsolt Butyka said, adding that the petition emphasizes that they are not against bears, but they would love to get a chance to take the necessary and adequate steps. “Even though we send papers to Bucharest, we get no response, nothing happens,” the mayor told maszol.ro

Local representative and tourist expert Attila Lukács was one of the initiators of the protest. As he told maszol.ro, for a certain time, the bears spotted in the town were attractions, but nowadays, the number of such incidents is too high. “We are talking about several tens of animals that visit the town regularly. I’m sure tourism is affected: A lot of tourists have canceled their visits to Tusnádfürdő; they don’t want to come because they’re afraid of bears,” Attila Lukács said. The local representative also added: Bear tourism should be banned, as people from other settlements come to Tusnádfürdő and feed the bears.

In addition, the program opportunities for tourists are also limited by the presence of bears. There are several walking routes for tourists, but these are pointless, as hikers don’t feel safe and are afraid to be in nature, the local expert stressed. “We do not want the bears to be killed; we just need to find a common solution with the authorities so that at least the most problematic bears can be moved elsewhere,” Attila Lukács told maszol.ro.

Just to “prove” how serious the bear presence is in Tusnádfürdő, two big game were spotted and scared off during the demonstration. The first intervention happened next to a hotel, the second at the train station.

Title image: Everyone in Tusnádfürdő feels the burden of the bear presence. Photos: Maszol.ro/Farkas Endre