The laboratory tests, just as in the first case, detected the presence of the A(H5N8) subtype of the virus. The examination showed that between the two cases, there is a cause and effect relationship because both farms used the very same vehicle to transport the dung.

The crisis staff gathered with the presiding prefect and introduced strict restrictive measures for the displacement of animals and people and the means of transport utilized in all farms in the area (eight poultry and one swine farm) as well as in all districts being monitored as a precaution due to – and as a consequence of – the primary infection. They will also monitor and inspect farms outside of the restricted territories in order to immediately intervene in case symptoms of bird flu are detected.

“In the scientific report of the European Food Safety Authority approved on the 22nd of March it is stated that the infections caused by the A(H5N8) subtype virus are not harmful to humans. The A(H5N8), A(H5N5) and A(H5N6) subtype viruses have adapted to bird species; their spreading happens through direct or indirect contact with virus-carrying wild and/or domestic birds, dung, corpses and polluted forage,” notes the National Animal Health and Food Safety Authority. 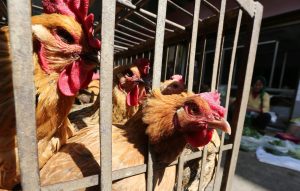 The Animal Health Authority signaled on Tuesday that on a poultry farm in Mámararos/Maramureș, where 18,699 chickens are kept, the bird flu virus had been detected. The Romanian Association of Poultry Breeders stated on Wednesday: Eggs were held up at the very moment that the suspicion cropped up, so infected eggs did not appear on the market.

The European Commission informed the member states in a letter dated January the 17th that the A(H5N8) virus had been earlier detected on a turkey farm in Hungary, and that products from this farm may have ended up in other member states. These products may have reached three points in Bihar/Bihor County.

Hungarian veterinary authorities have begun applying the necessary measures. Among other things, the culling of the infected animals is underway, and the authorities in charge have also established a three-kilometer-radius safety zone and a ten-kilometer-radius observation zone.

Veterinary authorities say the strain now found is H5N8 is similar to the one that had infected Hungary in 2014 and subsequently in late 2016, lasting into the spring of 2017.

During that second period, 2.66 million animals had to be killed, causing direct economic damages of HUF 11 billion (EUR 33 million) and additional veterinary costs of HUF 2 billion.

At present, the bird flu is spreading in Poland, Slovakia, Hungary and Northern Ireland.

Farmers’ markets to be created for local growers in Szeklerland cities

Ludovic Orban: MPs should give up their special pensions