The restoration of the Gyimesbükk/Ghimeș-Făget Rákóczi Castle is at a standstill after not getting a new construction permit for the continuation of work. András Deáky, a retired school director and the initiator of the restoration, is waiting for a favorable turn and says they are not giving up on the project.

It was the second time they asked and did not receive the construction permit for the reconstruction of Rákóczi Castle, so the work cannot continue, Deáky told Székelyhon News and Media website.

The management of the municipality said that the Bákó County Council, the entity that needs to issue the permit, could not agree on the subject. Moreover, Vilmos Görbe, the mayor who was believed to be a supporter of the case, passed away last spring. There has also been a resurgence of anti-Hungarian sentiments over the last two years, which does not favor the case, Deáky summarized. According to him, they are now waiting for the local elections and new leadership who will hopefully undertake the initiative.

“We have not given up, and we are prepared to continue work once they give us the construction permit. The funds gathered so far for the project are in a bank account. There are promises from the Bákó/Bacău County leadership, but we are waiting for the elections of the new administration, and then we will continue. In the case that we have the permit, the castle will stand, the initiator said. “We will also apply for EU funds also for the restoration,” Deáky added.

After the restoration, the castle will be two stories.

The permit for the restoration was first requested in 2015 and was granted the following year. After the procurement procedure was posted for execution in 2017, they were already getting to work when they found out that the validity of the reconstruction permit had expired because the municipality forgot to extend it. So all the approvals had to be requested again from the authorities, but up until now, they have not been granted any.

The value of the planned investment is EUR 220 000, with plans based on the research work of enthusiastic civilians and illustrated materials. Rákóczi Castle would be re-built from stone. The first story will house an exhibition space and restrooms, while the second level will have a coffee bar with a terrace.

The ruins of Rákóczi Castle can be seen on the right side of Ghimeș Pass, on the pre-World War I Hungarian-Romanian border. It was built in 1626 upon the order of Prince Gabriel Bethlen. Later, it was refortified several times, including by Ferenc Rákóczi II at the beginning of the 18th century, which was also when it got its name. 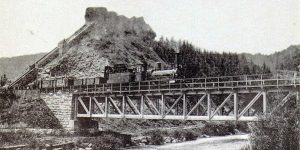 The ruins of the castle on an old postcard. (Mandiner)

The village was occupied by the Romanian army between November 13 and 20, 1918. Shortly thereafter, the Union of Transylvania with Romania was proclaimed, and the village, like the rest of Transylvania, formally passed with the Treaty of Trianon from Hungarian to Romanian control in 1920. In 1940, the Second Vienna Award granted Northern Transylvania to Hungary, and the village was held by Hungary until the end of World War II until the Soviet occupation. After this, the Romanian administration returned, and the commune’s status as part of Romania was formalized in 1947.

Until 1920, the village lay on the border between Hungary and Romania and as such, it had an important and large railway station designed by Hungarian architect Ferenc Pfaff. The main building of the station was comparable in size and elegance to the railway stations of Szeged and Fiume.

In 1950, as part of a wider administrative reform, the commune was transferred from Ciuc County to Regiunea Bacău. School education in Hungarian was abolished in 1965. Local teacher and school director András Deáky advocated for teaching in Hungarian and re-organized it after 1990. He also established a Hungarian language library using public donations.