A glimmer of hope for historical Herkulesfürdő bath

There is now a gleam of hope for the salvation of one of the main buildings of the bath of Herkulesfürdő (Băile Herculane, Herculesbad): the most urgent restoration works can begin in a few weeks. As we have previously recounted, there was a push-pull going on between the local association, which is determined to restore the main building, and the mayor’s office, which did nothing but obstruct the renovation project. The change in the situation occurred after the national authority for the protection of monuments stepped in to mediate between the parties.

The architects of the Locus Association claimed that the mayor’s office just wanted to get their hands on the several thousands of euros gathered from donations; the local administration refused several times to authorize the renovation work unless the money went into the town budget. Instead of supporting the civil society that managed to gather EUR 40,000 in a few months, authorities stated that the only legal way to carry out the restoration was if they managed the money and dictated the terms.

The roof of the main salon of the former Szapáry bath collapsed this February, so it was already urgent more than half a year ago to carry out the interventions required to salvage the building. The Szapáry bath was built in the French Renaissance style in the 19th century, based on the plans of the famous Hungarian architect Ignác Alpár.

According to the leader of the Herculane Project, Oana Chirilă, quoted by kronikaonline.ro, the association and the mayor’s office reached an agreement: Locus will provide local authorities all the documentation proving that they are capable of managing the renovation process. The town council on the other hand will have to soon pass a decision that allows the civil society to hire the contractor that will carry out the reconstruction work. Many people and several other organizations supported the cause. By this month, Locus has managed to gather another EUR 18,000. The amount raised is about half of the sum that would be needed for the entire restoration, but the emergency reconstruction work can be financed with it. The project leader stated that they plan to finish the most important work by springtime, and then they will try again to raise further donations.

The once so beautiful palaces and pavilions of Herkulesfürdő are in fact all decaying and unused; the situation is peculiar, as the propriety rights of the real estate are unclear. According to the current legislation, in this case there is no possibility of applying for funds from the national budget, nor from the European Union. The story is that in 2001 the former Năstase-government had agreed to a suspicious privatization procedure and a dozen historical buildings of Herkulesfürdő became the possession of a so-called businessman, a former hotel concierge, for just a token amount. He promised that he would invest millions of dollars in the revival of the baths, yet he did nothing. He then went into bankruptcy and mortgaged the monumental buildings for ridiculously small amounts of money, and some of his creditors now claim to be owners of parts of the real estate. 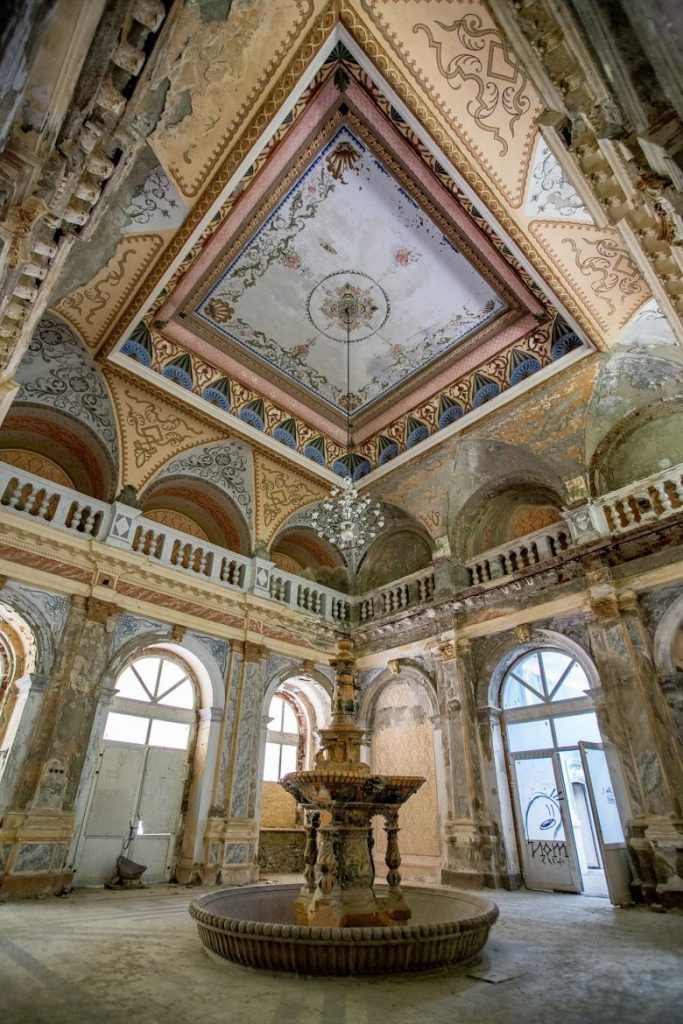 Example of a once lavishly decorated interior

The architects behind the Herculane Project are trying to find international partners who would recognize the fantastic historical value and tourist potential of Herkulesfürdő. They have even discussed supporting an initiative that would put Herkulesfürdő on the list of UNESCO’s Great Spas of Europe with the Austrian representatives of the International Council on Monuments and Sites (Icomos).

The curative effects of Herkulesfürdő’s thermal springs were noticed by the Romans, and emperor Traianus was the first to establish a resort here in A.D. 105–107. Romans had built a temple and several altars to Hercules, as he was considered to be the protective god of these springs. The philosopher-emperor, Marcus Aurelius, also admired the healing properties of their waters.

The golden age of Herkulesfürdő was during the time of the Austro-Hungarian monarchy, in the 19th century; that is when most of the buildings that we can see today where built. According to a late 19th century description, the center of the complex was the great therapy hall at the base of the Domogled peak. On each side of this hall there were lavishly decorated palace-like bath buildings. On the opposite side, on the right bank of the Cserna (Cerna) River, stands the monumental building of the Szapáry bath with its imposing cupolas. Herkulesfürdő was one of the favorite resorts of Austrian Empress and Hungarian Queen Elisabeth, known by everyone as Sissi, the wife of Emperor Franz Josef. Actually, three emperors (Franz the I, Josef the II, and Franz Josef), two empresses (Karolina and Sissi), and two kings (Carol I of Romania and Alexander I of Serbia) spent time at the resort.

Title image: The roof of the Szapáry bath collapsed in February