400 singing Szeklers in the Vatican

TransylvaniaNow: – Where did the idea come from to bring 400 Szeklers to the Vatican?

Sándor Incze, cantor of Csíkszépvíz (Romanian: Frumoasa): – In 2015 the choir of Csíkszépvíz got an invitation to the St. Peter’s Basilica to the kermis of the “Chapel of Our Lady – Queen of the Hungarians” (Magyarok Nagyasszonya kápolna) held each year on the 8th October. We happily accepted the invitation and went there with a group of 45 people. It turned out that we were the first choir ever singing in this chapel since its consecration by Pope John Paul II. in 1980.

During this visit we met with two Hungarian fathers serving in the Vatican (Ádám Somorjai from Hungary, and Gergely Kovács from Transylvania) who encouraged us to go back in the future with a bigger group to show ourselves to the Holy Father that we, Szeklers do exist, and also to promote the beatification of late Bishop Áron Márton.

TN: Organizing the travel of 45 people from a village is a challenge in itself. But to do the same with 400 people from 19 different settlements is another level I guess. How did you succeed?

S. I.: By not doing it alone. It was a teamwork with the vicar of Csíkszépvíz, Zoltán Gábor and the other cantors. Thanks to the fact that we both have regular meetings each month with the 21 cantors of Felcsík* (Ciucul de Sus) in Csíksomlyó (Sumuleu Ciuc), and informal meetings as well where our wives are also with us, we have a good relationship among ourselves. And this was essential to organizing the trip. First we chose the songs we wanted to perform, than in July everybody started the rehearsals in their own church while in September all the choirs got together in Csíkmadaras (Madaras) for joint rehearsals. [*Felcsík is a historical region in the upper part of the Csiki Basin around Csíkszereda (Miercurea Ciuc), in Hargita (Harghita) County.]

TN: In what way was it different singing in the St Peter’s Basilica now than in 2015?

S I: The group was ten times bigger then last time, so there was no chapel large enough to accommodate us, so we got seat reservations upstairs by the Cathedral altar. The guards warned me in advance not to use the organ in “tutti” mode (pulling out all stops), because it would be too loud and would disturb the tourists, who are visiting the Basilica during the mass as well. Later, when we started to sing the guards ran to me to asking why did I turn it on still? I showed them that I didn’t, saying that it was the not the organ, it was the choir. The singing of 400 people was so powerful and the acoustics of the St. Peter Basilica amplified the volume further. Filled with emotions, some members of the choir burst into tears during singing. Even Eduard Habsburg-Lothringen, the Hungarian Ambassador to the Vatican, who accompanied us, was also crying. 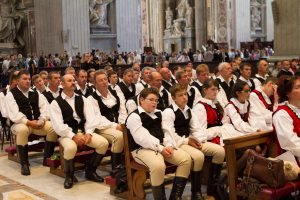 During the mass inside the St Peter’s Basilica

TN: And what about you? Were you also crying?

S.I: I couldn’t allow myself to because I had to pay attention to many things but I was crying inside in my soul, and it gave me goosebumps. I’ll never forget this uplifting experience.

TN: Two days later the choir also sang in St Peter’s Square at the Papal Audience, and you met with Pope Francis himself. How was that?

S I: Together with vicar Zoltán Gábor and Csaba Borboly – the president of the Hargita county council – we had the chance to meet and exchange a few words with the Pope. We also gave him a photo album about Transylvania, and invited him to visit us in Szeklerland. So did József Tamás, auxiliary bishop of Gyulafehérvár (Alba Iulia, Karlsburg), who had a chance to talk with him even longer, because he was seated by the table behind the altar during the audience. Meanwhile the 400 Szeklers in their traditional costumes had great success among the thousands of other pilgrims. When they started to sing, their voices just filled up the whole St. Peter’s Square and everybody was making videos of them.

TN: What are your plans now? Are you thinking to have a third pilgrimage as well?

S.I.: Yes, we are. Actually we just had a meeting this morning with the county council president, and agreed that we are going to organize another one next year. The details will be worked out later, but I can already tell you that the group will be even bigger than this year. Choirs from Alcsík (Ciucul de Jos) and from Gyergyó (Gheorgheni) also would like to join and we are counting already with 600 to 700 people. The exact date of the travel is not finalized yet, but we want to happen it before the Pope’s visit to Romania. Because it is 99% that he will visit Romania in 2019, but nor the exact date nor the detailed program of the visit is finalized yet. So we would like to go back before his visit and invite him again to Szeklerland and Csíksomlyó.