Any self-respecting journalist will follow up such a title with a lead substantiating the above claim,  but that would spoil the punchline of the entire story. I can assure you though that the title,18th century Szekler helps Cambridge environmental study, is by no means sensationalized.

Our story begins in Kovászna (Romanian: Covasna), a town of some 10,000 souls at the very south-eastern edge of Transylvania, currently best-known for its baths that alleviate heart conditions. It has a strong Reformed community that completed its first church in 1764, after ten years of construction.

It was destroyed on October 20, 1802 by an earthquake measuring 7.4 on the Richter scale which was felt as far as St. Petersburg and the Greek Isles. At the time, the entire population of Kovászna is estimated to have been at most 2,000 – no actual records exist – so it took the small Reformed community more than a decade to recover from the devastation and gather enough resources to build a new church.

Construction began in 1812 and was finished in 1815. Most native English people and some better educated others may recognize this year as the year of the Battle of Waterloo – and this mention is not a diversion from our main story. As was the custom of the time, the builders carved a short inscription above the church entrance, marking the year of completion.

As you can see, this is not a fancy affair, ancient Romans (not to mention the Egyptians) did this stuff much better. But do remember: we are talking about a small rural community in a borderlands where most able-bodied males – as elsewhere in Transylvania – were part of the armed forces protecting the borders.

Anyway, the carved inscription says “1815 – built for the glory of God during the reign of Emperor Francis during the French War and great shortage, one measure (of) wheat 28 RS”. This requires a bit of explanation. The Emperor was Holy Roman Emperor Francis II., who together with Tsar Alexander I. – commanding a numerically superior combined army – suffered a catastrophic defeat at the hands of Napoleon in the battle of Austerlitz in 1805. That also led to the dissolution of the Holy Roman Empire – which is no concern of ours.

Back to the inscription: the French War and the accompanying great shortage need no further explanation. The grain measure is a traditional Hungarian one, approximately 6.8 cubic meters while RS means rhénus forint (Rhine Florin), thus that volume of wheat cost 28 Florins at the time.

From a distance of more than 200 years, we can only guess that the builders put the wheat price there to give some reference to how big a community effort it was to build the church. Not that it relates in any particular way to this story, but in Hungarian, one synonym for wheat is élet (life).

Remaining in 1815, we now jump across the globe the island of Sumbawa in what is currently Indonesia, site of one of the biggest volcanic eruptions in recorded history. The eruption of Mount Tambora spread an estimated 150 billion (!) tonnes of rock, ash and organic matter into the atmosphere – finer particles went as high as 43 kilometres (yes, into the stratosphere). The ash from the eruption spread around the world, causing the Year Without Summer in 1816.

A few years ago, Sándor Gyila – physicist by training, writer, journalist and all-around busybody – happened upon a study by Clive Oppenheimer of Cambridge University entitled Climatic, environmental and human consequences of the largest known historic eruption: Tambora volcano (Indonesia), 1815. His restless and inquisitive mind perused one of the charts showing the evolution of wheat prices in the five years following the Tambora eruption. He noticed, however, that the chart had no wheat price for the Austro-Hungarian Empire – the nearest one was the Cracow (Poland) price. 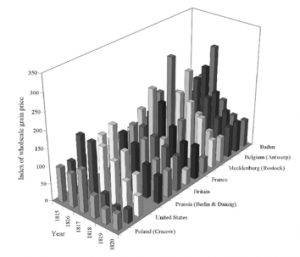 So he fired off an e-mail to Cambridge environmental, telling them that the wheat price is right there, carved in the stones of the Kovászna reformed church. In their reply, the department of geography thanked Gyila and sent its regards to the goof reformed people of Kovászna.